Need Extra Cash? Here Are The 22 Most Common Side Hustles And How Much Each Job Pays 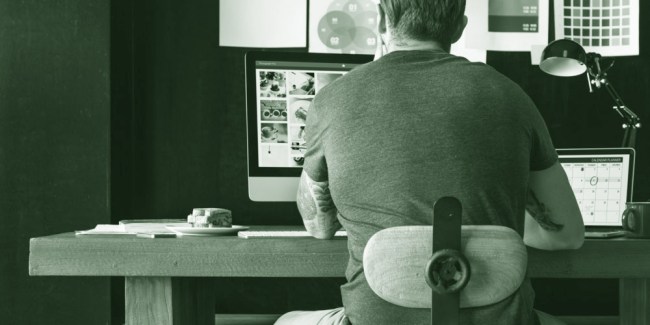 Did you know that right now more Americans today are working multiple jobs than at any point in the last 20 years? I suppose, given that 7.6 million people in the United States reportedly have some kind of side hustle, many of you do, in fact, know this to be true.

So if you are one of those people who has a second (or third) job to help you make ends meet or give you some extra spending cash, or are thinking about taking a side job for whatever reason, choosing one that not only pays the best, but also fits with your personality is pretty important given the additional time commitment.

Luckily, for those who are facing that situation, the folks over at CreditLoan.com surveyed 996 Americans working at least one side job in addition to a primary occupation. Using that survey, they attempted to find out three things.

• What motivates them to take on the extra work?

• Which are the best side hustles that pull in the most cash?

• And, finally, how their Myers-Briggs Type Indicator® (MBTI®) might influence their side hustle satisfaction and success.

Despite the number of people with more than one job being at a record high, CreditLoan.com’s survey survey found that financial need was not the primary motivation for most people who take on a second job.

• Nearly 66 percent of Americans surveyed said they worked beyond their primary employment to have more spending money.

• More than half of people polled also put in extra hours at their side gigs to increase their savings.

That extra money, as I mentioned, does comes at a cost, however, as in time spent not doing other things.

• Nearly half of Americans working a side job confessed to giving up recreational time to do it. 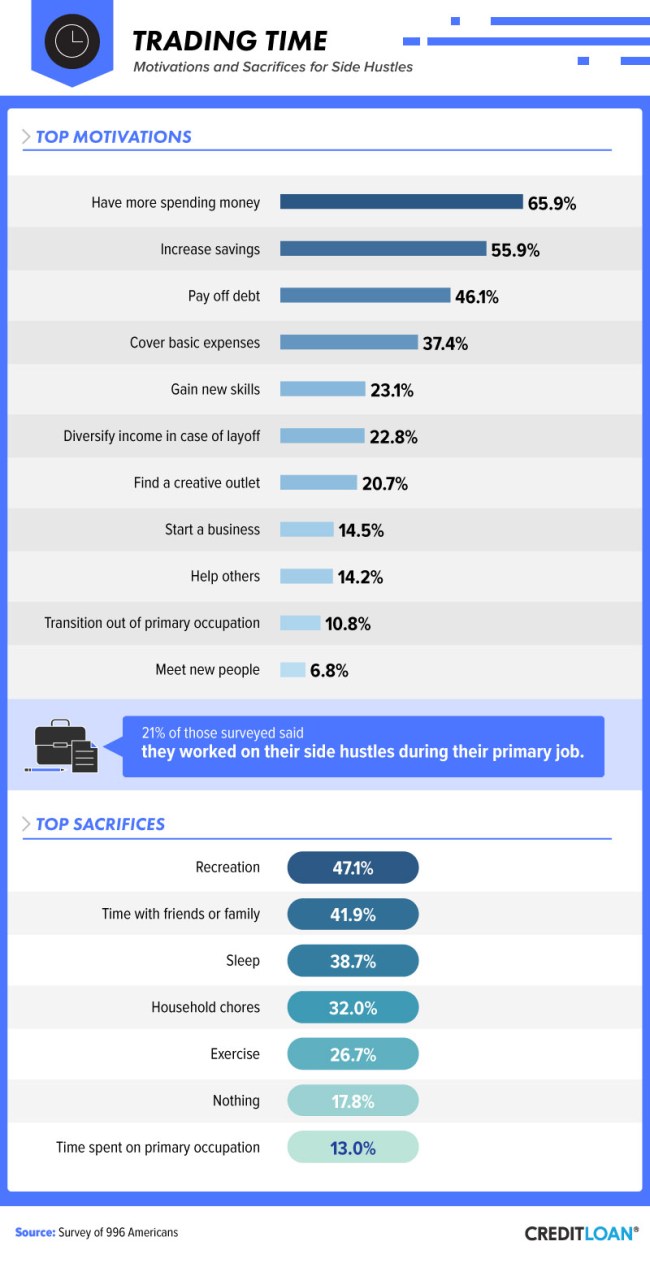 As for the best side hustles that pay the most, selling and renting property easily topped of the list. It was followed by ride-sharing, fitness training or coaching, and freelance work or consulting.

When it comes to picking a side hustle that fits with your personality, not all jobs are created equal.

There are eight core personality traits identified by the MBTI. Combined, they help provide context and meaning to the seemingly random variation in our personalities. Here is a quick breakdown of the eight personality traits and their characteristics. These terms and definitions have been taken from the MBTI website:

• Extraversion (E) or Introversion (I): Do you prefer to focus on the outer world or on your own inner world?

• Thinking (T) or Feeling (F): When making decisions, do you prefer to first look at logic and consistency or first look at the people and special circumstances?

These are the side hustles best suited to each personality type… 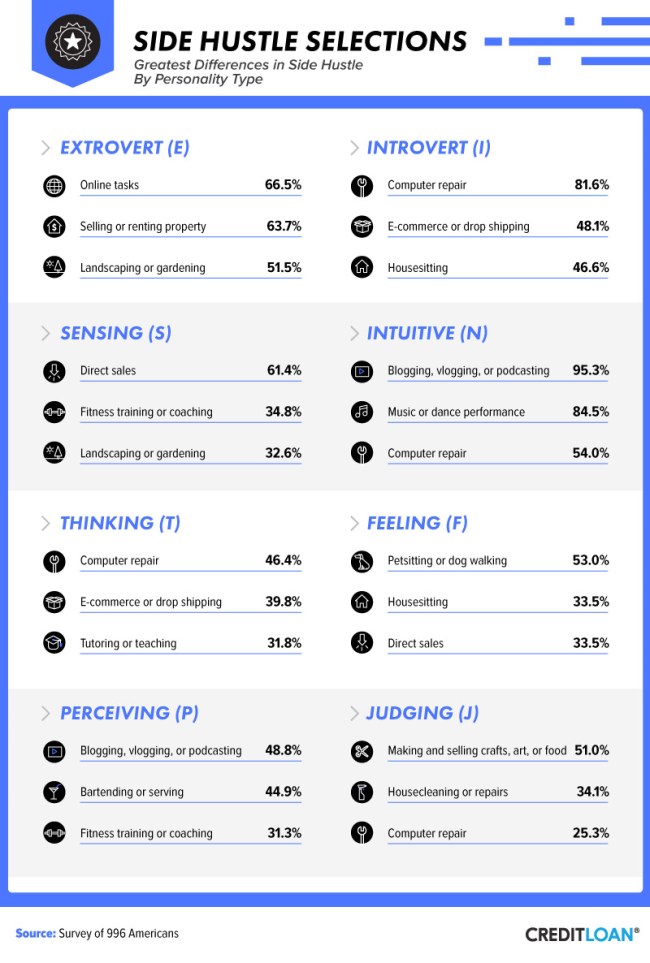 Now, being able to find a balance between income and hours worked is important when considering a second job. According to CreditLoan.com’s research, being able to do that might come more naturally for certain personality types than others.

Our survey revealed people with an ISTP personality type (introvert, sensing, thinking, and perceiving) earned the most, with a median income of $500 after only 45 hours of work each month. Following ISTPs, ESTJs ($450), ENTPs ($415), and INFPs ($410) earned the most, although the extroverted types put a median of 52 to 55 hours into their side gig each month.

A few personality types put in more hours than any other group but still earned among the lowest monthly incomes. People who identified as both ENFP ($320) and ISFP ($300) contributed roughly 60 hours a month to their crafts but earned less monthly cash than other people putting in half or only a third of the time. 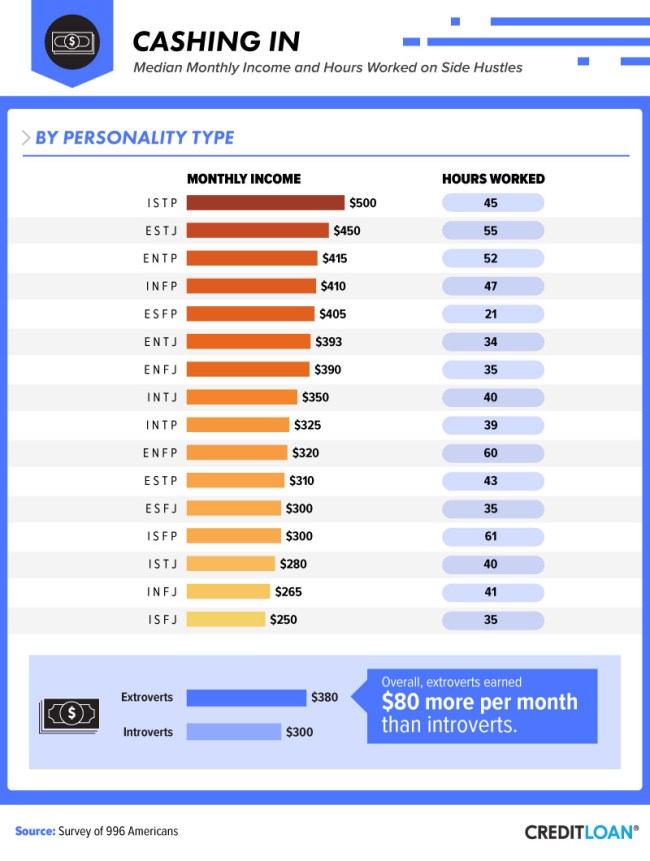 Another question is how having a side hustle can affect how satisfied a person feels when putting in all that extra time and effort. And while those surveyed said their primary employment was more likely to give them more satisfaction than their side jobs, people did still feel sense of fulfillment people earned from their side hustle. 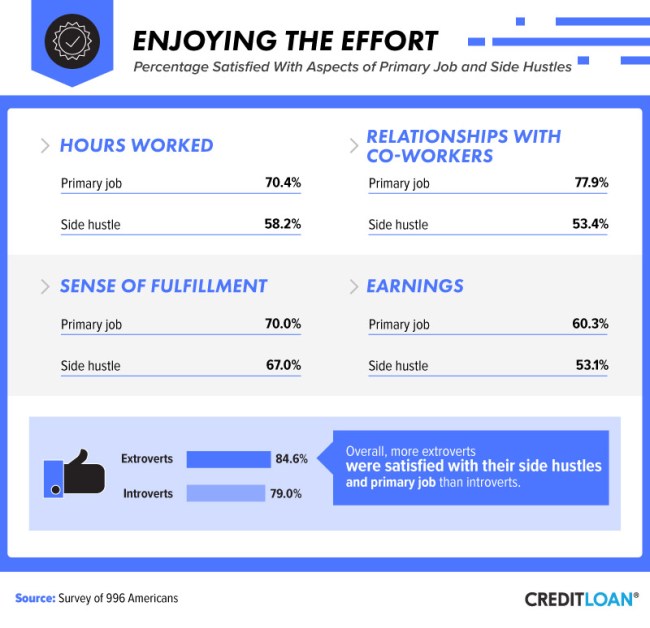 So as you can see, while the additional income is nice and certainly provides one level of satisfaction, choosing the right side hustle for you can also provide additional benefits in addition to the extra income.

View the full results of this study as well as its methodology here.