Not All Retailers Had A Happy Holiday; Ford And Jaguar Announce Layoffs; BlackRock Plans Staff Reduction

RAIN ON YOUR PARADE 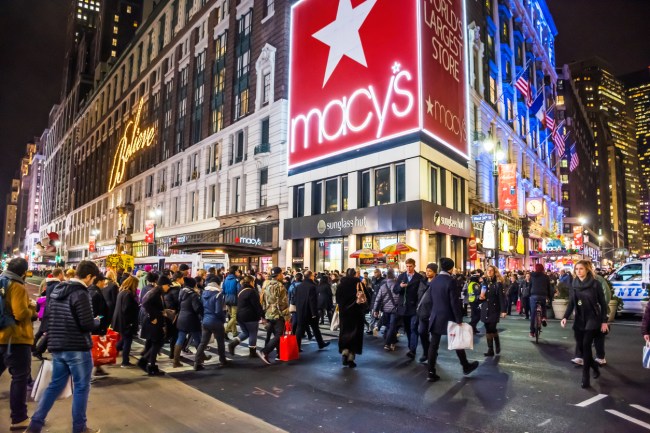 January 10th, 2019 will go down as one of the darkest days in Macy’s history. And that’s saying a lot considering a giant Cat in the Hat balloon once put a woman in a coma following an accident during the company’s namesake Thanksgiving Day parade.

Macy’s “Black Thursday” was the byproduct of lower-than-anticipated holiday sales for a large part of December following a solid Black Friday and Cyber Monday. Shares of the retailer fell more than 18% on the news. And they weren’t alone …

Shares of Victoria’s Secret parent, L Brands, also got crushed following a 6% drop in sales during December despite heavy discounts. The brand blames changing consumer tastes. Because surely it has nothing to do with the company’s systemic fat shaming and its trans-bashing CMO.

It’s not all bad

Of course, there are winners, there are losers … and then there is Amazon. Holiday sales on the e-commerce giant grew a whopping 17% this year. Wipe that sh*t eating grin off of your face, Bezos.

But Amazon wasn’t the only retailer who had consumers shamelessly expressing their love with material items at an alarming rate. Walmart’s less “trailer-trash” rival (read: Target) posted a 5.7% same-store revenue increase this holiday season. Target credits in-store pick-up and strategically filling the void that Toys R Us left in the brick and mortar landscape.

Despite all this, Target’s shares fell almost 3%. Apparently, the Street wasn’t too jazzed about the big box retailer not raising its guidance going forward.

*Classic narrator voice* In a world where big money doesn’t come without a price, George Clooney is … Larry Fink in “Up in the Air 2.”

Fink and Co. announced that BlackRock will “downsize,” laying off more than 500 employees. That number reflects roughly 3% of total employees at the world’s largest asset manager.

The money manager has been rocked by market volatility and pummeled by investors who are heading for the exits in search of lower fee investment opportunities. “F*cking Fidelity. *eye roll*” – Fink, probably.

And it isn’t just the worker bees who are on the chopping block. BlackRock announced it is shaking up its executive ranks. Yesterday the trillion dollar money manager promoted Mark Weidman, the head of BR’s ETF biz to a new global strategy role (read: Fink’s heir apparent).

State Street, another asset manager plans to trim 15% of its senior management in what some (read: us) are calling “the Boston Massacre.”

Both Ford and Jaguar Land Rover announced that they are planning to cut jobs at their “East Atlantic” production facilities mostly as a result of an overall decrease in demand for vehicles thanks in part to Brexit.

Jaguar Land Rover, the UK’s top car producer, announced that it would bid adieu to some 4.5k employee worldwide (which represents 10% of the company’s overall workforce) as part of a plan to reduce costs and improve cash flow through 2020. Roughly 1.5k employees were shown the door in 2018.

Meanwhile, Ford hasn’t disclosed the number of employees it plans to force out of a job, and presumably into a life of prostitution and drug-muling, but the number is rumored to be in the thousands. The American based Chevy-killer is in talks with unions to lower costs and plans to focus on more profitable models going forward. Did somebody say “Ford Taurus!?”

Blame it on Brexit

Seeing as the cuts were preplanned it’s hard to blame this all on Brexit. Jag’s CEO Ralf Speth pointed out that the Chinese trade-war has caused a decrease in demand, and an overall sentiment change against diesel vehicles (of which the Land Rover makes many) resulted in the almost 5% drop in retail sales during 2018. The company’s 2019 outlook doesn’t look too hot either.