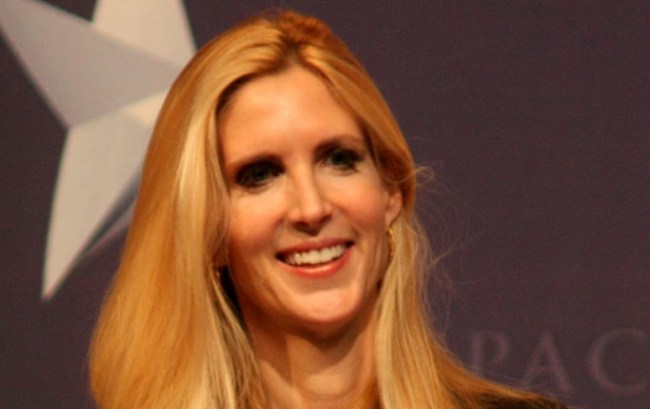 Best-selling author Ann Coulter said she would speak at the University of California-Berkeley, even though the administration canceled her event. The conservative voice was invited to the campus to speak and her event at Berkeley was scheduled for April 27 until the school canceled her appearance.

“Yes, it was officially banned,” Coulter told Hollywood Reporter of her speaking engagement. “But they can’t stop me. I’m an American. I have constitutional rights.”

The conservative firebrand was invited to speak at the university by the Berkeley College Republicans and was co-organized by a campus group called BridgeCal and the Young America’s Foundation.

Coulter, who has 12 best-selling books, was given certain demands by the school in order for her to speak on campus. She was told that she had to deliver her speech in the afternoon, only students could attend, and the speech location would not be announced until close to the event. Coulter agreed to the terms.

“I called their bluff,” Coulter said.

However, only a week before her event the infamously progressive university decided to cancel the speech last minute. University heads canceled the speaking engagement citing fear of security threats. In a letter to the Berkeley College Republicans written by Scott Biddy, the vice chancellor, and Stephen Sutton, the vice chancellor for student affairs, they said the school had been “unable to find a safe and suitable venue for your planned April 27 event featuring Ann Coulter.” The letter continued, “It is not possible to assure that the event could be held successfully — or that the safety of Ms. Coulter, the event sponsors, audience and bystanders could be adequately protected.”

The university said they are willing to reschedule the event, “We are going to do whatever we can to make that happen at a time and a place when police can provide safety and security.”

Berkeley was the site of violence in February when Trump-supporting provocateur Milo Yiannopoulos had his speech canceled because of rioters. There have been multiple protests since February, most recently last week when pro-Trump supporters and members of Antifa clashed in Berkeley.

During the latest riot, Mother Jones reporter Shane Bauer noticed that many Berkeley police officers were not attempting to break up the riots and allowing the violence to continue.

I tell a police officer I've been seeing people get beat up all day and they haven't been around. "Okay, and?" he says. pic.twitter.com/OuGEcvvb8R

This is the third time this year a conservative speaker has been denied a chance to speak at the university. The University of California-Berkeley is a tax-payer-funded school which received $370 million from the federal government last year.

On Wednesday night, Coulter appeared on Tucker Carlson Tonight where she vowed to make her appearance at Berkeley.

“What are they going to do? Arrest me?” she asked.

If she is arrested, will it be a “symbolic arrest?”

Whatever you think of Ann Coulter’s politics, this is rather concerning developments coming from the birthplace of the Free Speech Movement.