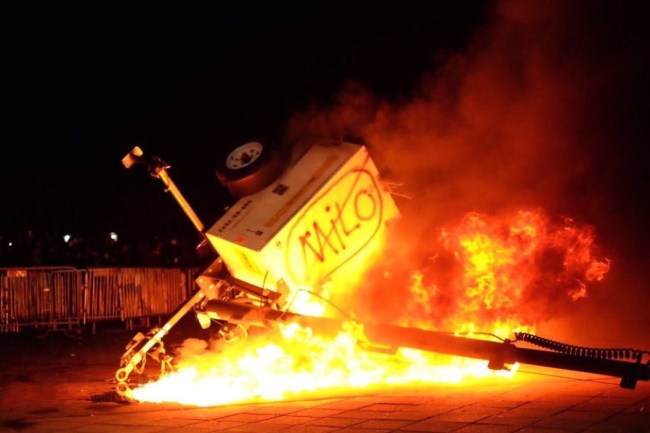 Conservative provocateur Milo Yiannopoulos was to speak at an event at UC Berkeley on Wednesday night, but violent riots caused the speaking engagement to be canceled. Violent protesters clashed with police, destroyed barriers, and attempted to storm the building where the 500-seat, sold-out event was scheduled.

UC Berkeley, which is coincidentally the birthplace of the Free Speech Movement, canceled the speech by the polarizing Breitbart News editor that was sponsored by the campus Republican club.

At #miloatcal has been cancelled. Milo has left campus. @UCBerkeley @CalSurvivor

UCPD has issued a stay away in or near Bancroft and Telegraph due to major protest attacks. https://t.co/XxBWL3OaeZ #miloatcal

.@UCBerkeley @UCPD_Cal continues to issue a dispersal order for the #miloatcal protests. Please leave the area.

Rioters shot off fireworks and flares.

A group of antifa are shooting fireworks at the building where Milo is set to speak at Berkeley pic.twitter.com/7Mtcer9ejO

They set a large bonfire outside the building.

Voice from crowd: "this shit's really on fire." Yep. #Milo. Right next to a tree, next to the building. pic.twitter.com/Tz7WCZhQP1

This was the fire a couple minutes ago. It just let out a huge bang. PD telling people to get back as FDT plays in background. @NBCBayArea pic.twitter.com/f6RPv0XF7i

Some of the alt-left rioters bash windows and tear down barriers.

Event that was to feature a speech by alt-right figure Milo Yiannopoulos canceled amid protest on UC Berkeley campus https://t.co/MtKh0vdfdo pic.twitter.com/habG0p2PiM

Celebration after Milo at Berkeley was canceled pic.twitter.com/7tW2ka8qcZ

They are surrounding people and beating them with Antifa flags and poles. pic.twitter.com/v3o1kEpwFj

One person was hit and on the ground.

Chants of "Mexico!" "Fuck you Nazi scum!" and "I'll kill you!" as man is pummeled on the ground by rioters. pic.twitter.com/G2CqvfhOpP

Didn't see what happened but a man is on the ground. Looks like he got hit. #Milo pic.twitter.com/AU2Hda4aKp

This man had blood covering his face.

Antifa are out of control attacking people and setting off fires. pic.twitter.com/3s3swrYSzf

There were chants of “Fuck those fascists!”

The political violence was successful in suppressing Milo’s First Amendment right to freedom of speech for his speech at UC Berkeley to 500 attendees, but as of 10 p.m. Yiannopoulos was national headlines and gave a live interview to Tucker Carlson on Fox News, who garners nearly 4 million viewers nightly.