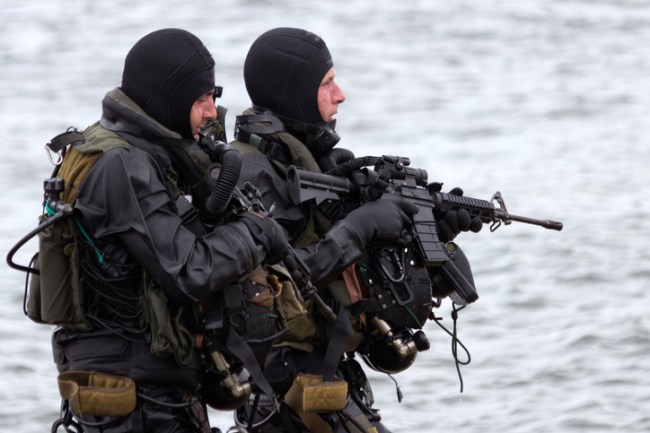 Colleges are becoming war zones. Alright, maybe it’s not Afghanistan, but the threat of some lunatic walking into a classroom and opening fire on unsuspecting students is all too real.

Emerson took his years of expertise and turned them into 100 DEADLY SKILLS: The SEAL Operative’s Guide to Eluding Pursuers, Evading Capture, and Surviving Any Dangerous Situation. The book is a practical guide containing proven self-defense skills and evasion tactics modified from the world of black ops to help anyone respond in numerous “worst case” scenarios.

We asked Clint for some tips on dealing with a homicidal roomie and on how to handle worst case scenario situations on campus.

Ok, here’s the scenario — A student is in a semi-full classroom, let’s say about 30 people, and a gunmen enters. Let’s assume ducking for cover or running for the door are the obvious options but unavailable. How does a person diffuse the situation, or if all hope is lost, how do they protect themselves or others?

​Clint Emerson:​ When stuck in confined environments where running and hiding are not an option, then you must FIGHT. First, quickly establish a team of three to four willing fighters. Second, assigned areas of responsibilities – one persons goes for the weapon, one person goes for the legs, another goes for the head with the primary goal – GET CONTROL OF THE WEAPON. Lastly, as a fighter you must be VIOLENT! Unleash holy hell onto the shooter and do not stop until the threat has been neutralized.

What if your roommate is coming at you inside your dorm room. His intent is to harm. Assuming the dorm has all of the typical things found in a college dorm, what are some of the best “weapons” to pick up in self defense?
​
​Clint Emerson: First and foremost, if your gut says that your roommate might harm you – prepare some improvised weapons ahead of time! A sock with a a roll of quarters slid inside will certainly crack your roommates skull open. A steel barrel pen, like the Zebra 401, take take out an eye, a vein or an artery. 100 Deadly Skills will provide details to these improvised weapons along with others. ​
​
What if the roommate is armed?

​Clint Emerson: ​If you encounter any active shooter – follow the following mental checklist.​

RUN, HIDE, FIGHT – A response checklist of actions to take if caught in the cross fire. If you can RUN, run away from the threat in a zig zag pattern. If you can’t run, then HIDE. Hide behind objects that stops bullets. If you find yourself in a place where running or hiding isn’t possible (like a train in France) – FIGHT and fight as a team if others are around.

What are some of the basic survival tips taught in SEALS that can be translated to a college scenario?
​
​Clint Emerson: After 20 plus years of service as a SEAL​, the lessons learned are substantial. If I had to narrow it down to a couple of survival tips I guess I would go with these​:

1. Train how you fight, fight how you train. You have to do more than just read this article – you have to implement thoughts and skills of survival into your daily routine, make them a habit so when crisis strikes – you act out what you have already put in place. Ultimately decreasing exposure to the threat and increasing survivability.

2. Being “advanced” is all about doing the “simple” really fucking good.​

​Keep it simple, be good at simple. If you over complicate your preparedness or response then the odds are, it won’t work. Be good at simple and you’ll end up far more advanced than your adversary.

NEXT: Why We Lie And How To Recover After Getting Caught In A Life-Altering Deception