U. Of Michigan Police Chase Student, Put Everyone In Danger, Totally Campus 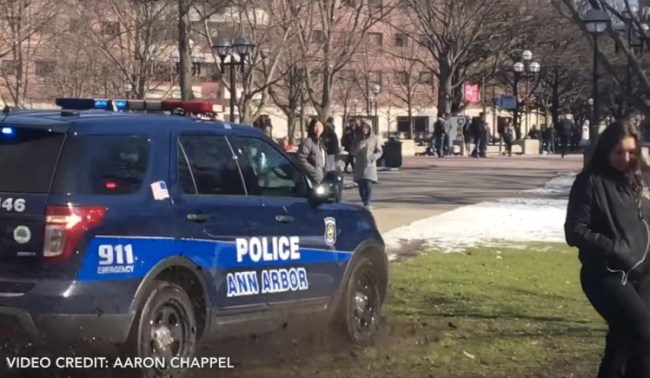 The University of Michigan Campus Police and Ann Arbor PD are going to have some explaining to do for this one. As you can see, these officers chasing a student through the middle of campus (Diag) put a TON of students in harm’s way.

The footage was shot from the middle of campus and shows several University of Michigan Campus Police officers pursuing the student on foot. Then an Ann Arbor Police Department SUV comes barreling in out of nowhere, with his lights and sirens on. That Ann Arbor Police Department officer is driving with reckless abandon, putting students in danger, and manages to lose control of the vehicle and take out a lamp post on campus. Now, imagine if that was a student and not a fixed metal lamp post. Watch the craziness unfold:

After this dangerous chase in a crowded area, the student was arrested on the University of Michigan Diag. The Campus Police aren’t saying what crime the student has been charged with, just that the student was wanted in connection with a robbery.

Perhaps because it was an Ann Arbor PD SUV and not Campus Police the officer driving and taking out the lamp post hasn’t been properly trained on how to pursue suspects in crowded areas? Or maybe there was something else going on here.

According to the Michigan Daily, Campus Police officers spotted the suspect on campus and attempted to apprehend him when the student took off. They gave chase, and that’s when the driver came in and put everyone in danger AND caused some serious damage to the University of Michigan Diag.

The area where the lamp post was taken down had to be blocked off to students because of exposed wires from the damage.

You can read a full report of the chase and the stated reason for officers pursuing the suspect over on the Michigan Daily.