The 10 Best ‘Christmas’ Movies That Aren’t Really About Christmas 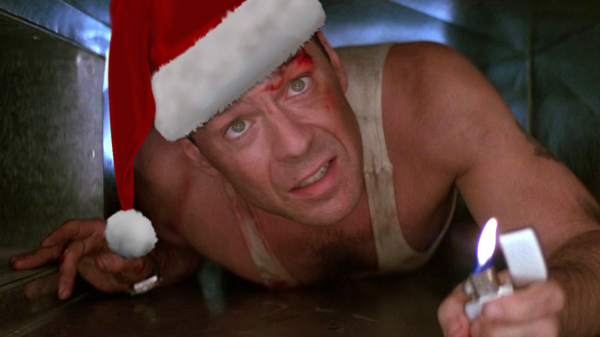 When it comes to Christmas movies, there are timeless, family classics such as Frank Capra’s It’s Wonderful Life and Michael Curitz’s White Christmas. There are coming-of-age tales such as A Christmas Story and Home Alone. Then, there are just ones that have some bizarre plot where the everyday, common man puts on the red Santa Claus suit to prove something to somebody (usually his kids_ or just drink himself to the point where a bullet through the liver does no harm.

This group of movies has featured stars ranging from Tim Allen (The Santa Clause) to Arnold Schwarzenegger (Jingle All the Way) to Billy Bob Thornton (Bad Santa).

Somewhere in between these three categories lies a bevy of other must-see Christmas-themed movies, including Miracle on 34th Street, Scrooged, National Lampoon’s Christmas Vacation, and Elf.

If you fall in the latter category, you’ll probably have enough time within the next week to try out some of these 10 movies that have actually nothing to do with Christmas other than they’re set during the holiday season.

I’m not even sure if this movie takes place around the holidays, but seeing that Ben Affleck and Gary Sinise go around robbing Casinos in Santa outfits, I’d say it’s a safe bet. Really, the reason to watch this movie is a prime display of Charlize Theron’s tits about halfway through. The action and the plot twist aren’t all that bad either. It’s not a bad way to spend a mindless afternoon.

Christmas time or not, this American classic is responsible for so many things, most notably the National Treasure known as Lord Scott Disick. And for that we give thanks.

You thought I was going to go with Tim Burton’s other Christmas-set feature, A Nightmare Before Christmas. However, I didn’t want any movie on this list to include the word “Christmas,” so I opted to go with a movie that is so not about Christmas that it’s not even funny. No seriously though, if you haven’t seen this one, it’s not funny — at all.

Despite having to watch Johnny Depp’s painful scissor-wielding outcast struggle to find love and come to terms with his hideous appearance, the plot does center on Christmas, which only adds fuel to this already isolation-themed fire.

Hey, I didn’t say this list would be full of up-lifters.

It’s amazing how many movies have been made about Christmas or plots are set during the holiday season. What’s more amazing is that Batman Returns very well may be the most commercially successful of all of them.  Yes, the original Home Alone brought in more cash, but how could it not with Macaulay Culkin’s pre-drug-addicted face on the poster? Batman’s poster featured its hero in a mask, played by Michael Keaton at the end of his superstar run in the early 1990s, and a hard-to-describe villain, played by the notoriously ugly Danny Devito (yes, I know he plays the Penguin, but let’s not go here).

The point being, if there’s a movie that truly defines Hollywood’s version of Christmas this may actually be it. After all, it’s a cash business that only cares about the bottom line.

Economics aside, when Batman is framed for abducting the Ice Princess, there is a real moment of “how will he get out of this one?” which has been enough to keep my interest over the years. Say what you will about this Batman — most call it the worst, or second worst, but you can’t deny the holiday season backdrop does its job and then some as the Penguin and Max Schreck go to work to show Gotham a real, dark Christmas spirit.

Side note: kudos to Tim Burton. The guy really knows how to make mediocre movies that qualify as fringe Christmas movies.

For those of you who are impatiently whining, yes, the original will pop its head on this list eventually — don’t worry. Let’s just move on before any more people complain.

I don’t even know if there’s a parody of Santa in this flick, but it doesn’t matter. Rocky goes toe-to-toe with Ivan Drago on Christmas Day and gives America something to celebrate, beating the big, bad Russian in the 15th round. Is it the best of the series? I think so…

I could be wrong here, but this is Mel Gibson’s only Christmas-themed movie appearance in his entire eccentric career. I’m almost sure he belongs on the above list of actors who play the common man who puts on the fat suit, but that argument is for another time and place. What’s really important here is that Mel nails the mania of his character Riggs to the point you don’t know whether or not he’s actually acting. It’s very rare that actor and character so seamlessly become one — this is one of those instances. This is a movie I love to see pop up on TNT during this time of the year, because it doesn’t hold the ratings consistency of A Christmas Story and is usually left out in the dark come Christmas time.

Just throwing it out there, I’d rather watch manic Mel than see the kid get his tongue stuck to an icy pole. Call me a Grinch, I don’t care.

The recurring plot device of Frank and Carl meeting on Christmas definitely makes this worthy of belonging on the list, although the plot takes place over a decade. There’s something so creatively purposeful about these rendezvous the two characters share during the holiday season that I can’t help but think Steven Spielberg really just wanted to make a Christmas movie but his producers wouldn’t let him. Oh wait; Steven Spielberg was the producer of this movie. Mhm…well that helps explain the unrealistic amount of time this con and cop got paired together in December. Regardless, this one’s an absolute classic.

There wasn’t a chance in hell that comedy would be completely shut out here, and thankfully, Trading Places helps bring some semblance of balance to this list. If you haven’t seen this one, please stop reading and come back to this article when you do.

What am I saying, you’re so close to the finish line that you can’t stop now…

Alan Rickman’s Hans Gruber is one of the ten most memorable villains in cinematic history, but it’s Bruce Willis’ John McClane who saves the day at the end of the movie, while giving birth to one of our favorite cultural catchphrases. Overall, this movie is too damn memorable not to belong No. 1 on this list.

And the reason why it belongs here, and not alongside It’s A Wonderful Life is the fact there is no Santa, there is no family, and there certainly is no holiday spirit or lesson to be learned. Rather, there’s just one, badass mofo on a mission. I wouldn’t want my Christmas movie to look any different. Who needs the man in the red suit, anyway?