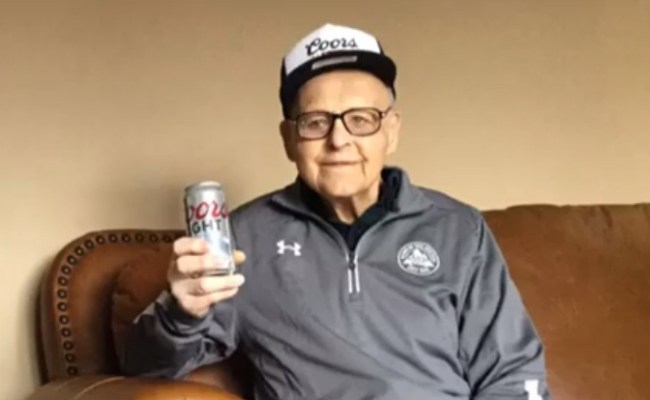 Everybody is looking for the fountain of youth that will postpone the inevitable. One man who knows a lot about living long says the elixir to cheating the grim reaper is beer. This is my favorite kind of anecdotal evidence on how to extend my life.

Andrew E. Slavonic turned 101-years-old last week and he was asked what the secret to living a long life. The centenarian revealed that the secret is drinking a Coors Light beer every day. The World War II Air Force veteran says he has enjoyed a Coors Light daily for the last 15 years only after his doctor recommended he switch from regular Coors to Coors Light. According to Andrew, the best time to crack open a cold one is at 4 pm. “We got to have the one at 4 o’clock. That’s the most important one,” Andrew said.

“On behalf of the entire Coors Light family, we wanted to wish you a Happy 101st Birthday. We wanted to personally thank you for your years of service and being a lifelong fan of Coors Light. We completely agree with your son’s statement – ‘The bluer the mountains are on the can, the better,’” a letter from the company to Andrew read.

The WW II vet appeared on Fox News last week with his son Bob Slavonic and Andrew told of his love of the Silver Bullet. During their appearance on Fox & Friends, MillerCoors thanked Slavonic yet again.

During his appearance, MillerCoors announced they would be flying Andrew and Bob to the company’s headquarters in Golden, Colorado. “On behalf of the entire Coors Family, we would like to fly you and your son Bob out to our hometown Golden, Colorado, to take a tour of our brewery. We will see you in the Rockies!” the company said in a statement. If one beer a day can allow you to live to at least 101, that means that some of you are going to live for eternity.