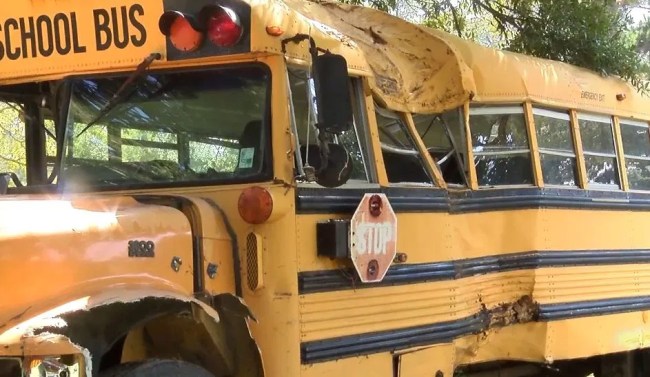 An 11-year-old boy in Lousiana led a dozen police cars on a 13-mile long chase while driving a stolen school bus before crashing it into a tree. You know, just a typical Sunday in Baton Rouge.

According to police, the unnamed boy somehow got access to the privately owned bus and decided to take it for a little spin.

The Advocate reports that police believe the school bus was a push-button start vehicle. His joyride began sometime around 10:45 a.m. on Sunday at Progress Head Start and ended in a crash more than 11 miles away after a 13-mile police chase.

#update Here’s a closer look at the bus. The homeowners said they saw the kid get out of the bus and he looked okay. Still no confirmation on an age, but the homeowners say the child was very small. @WBRZ pic.twitter.com/vg8bCFNnWG

Police officers told WBRZ-2 that they believe the boy was too small to reach the pedals and had to stand up to drive the bus.

They also reported that he was laughing and flipping his middle finger at cops as he drove past them.

He ended up running over several curbs, hitting three cars with the school bus, and intentionally trying to hit another car, before crashing into a tree in the yard of Libby Smith in Central, Lousiana.

“Thank goodness he was okay and safe,” Smith told CBS-17. “But it was not your typical Sunday afternoon occurrence for sure. But we’re blessed and that it didn’t do any more damage than what it did.”

The 11-year-old boy was charged with theft of a motor vehicle, aggravated flight, three counts of aggravated damage to property, and aggravated assault (for attempting to hit a vehicle with a driver inside it). No injuries were reported.

Police have no idea how he gained access to the bus or why he stole it.