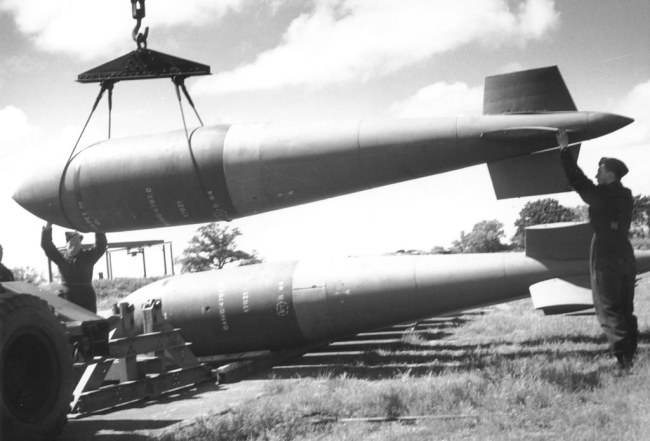 The Tallboy (Bomb) was developed by British aeronautical engineer Barnes Wallis for use in World War II and it’s classified as an ‘earthquake bomb’ which differs from other types. Most bombs are designed to explode on the surface/on impact but an earthquake bomb gets all up in there and explodes below ground, creating shockwaves and leaving massive craters.

This type of bomb was pioneered by Barnes Wallis in WWII to penetrate underground structures and to destroy ‘difficult targets’ like bridges with the shockwaves and craters taking them down. Did I mention that the Tallboy Bomb weighs a cool 12,000 POUNDS? An average African elephant weighs between 5,000 and 14,000 pounds so this single bomb weighs as much as some of the biggest elephants in Africa. A bomb.

Well, a Tallboy Bomb found near the town of Swinoujscie, Poland forced over 750 locals to be evacuated while the bomb squad suited up to diffuse the massive bomb. There’s no telling of how many unexploded bombs are littered throughout Europe but there are A LOT and the bomb squads are usually ready for them.

What started out as an underwater bomb defusal quickly turned into a detonation, on accident, and the footage is awesome. Thankfully, the divers were in a safe position before it went off. The eruption in that water is eerily similar to watching something heavy drop into a toilet, like five Double Decker Tacos or a bowling ball.

Here’s what happened, according to NBC News:

“The deflagration process turned into detonation. The object can be considered as neutralized, it will not pose any more threat,” Second-Lieutenant Grzegorz Lewandowski, the spokesman of the 8th Coastal Defense Flotilla, was quoted as saying by state-run news agency PAP.

“All mine divers were outside the danger zone.”

Swinoujscie contains a liquefied natural gas (LNG) terminal but a spokesman for the town’s mayor told PAP no one was injured and no infrastructure had been damaged. (via)

I don’t know why this next detail of the story impresses me so much but it does, they actually know from when and where this bomb originated. It was dropped by the Royal Air Force in 1945 on the German cruiser Lutzow. In my mind, WWII was just an all-day, everyday attack on everything. Bombs galore. And keeping track of all those attacks would be impossible. I’m wrong. They know everything. Of course, they do.