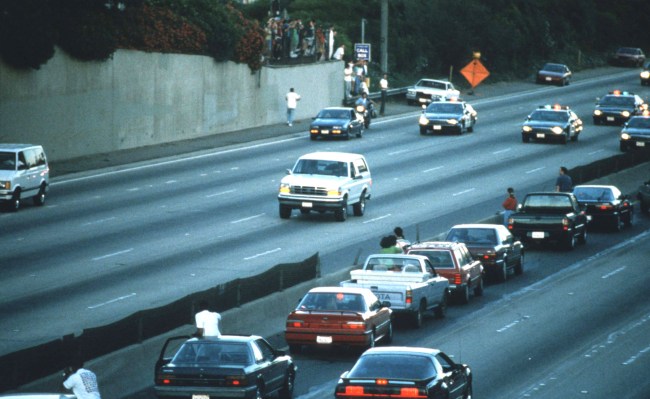 Mark your calendars and start following Ford Motor Co. on social media, because July 9, 2020 is going to be a very entertaining day on that front.

That’s because, much like Lady Antebellum, Ford apparently doesn’t know how to use Google as July 9, 2020, in addition to being that day for the grand unveiling of the rebooted 2021 Ford Bronco, is also the day the most famous Ford Bronco owner in history, Orenthal James Simpson, celebrates his 73rd birthday. (Might as well go ahead and throw him a follow too just for that day alone.)

Hopefully not too wild.

“I gotta believe this is a mistake. Didn’t anybody look at the calendar?” John McElroy, Autoline.tv host told the Detroit Free Press. “Ford Motor Co. does not want to correlate the launch of such an iconic and important vehicle with a police chase with a notorious person.

“Everybody in the world knew that O.J. was fleeing in a white Ford Bronco.”

Everybody except Ford apparently. In fairness, the new 2021 Ford Bronco was originally supposed to debut in April, but, well, you know.

“We’re going to reveal Bronco just like we said we would on July 9,” Mike Levine, Ford North America product communications manager, told the Free Press, adding that the date chosen coinciding with The Juice’s birthday is “purely coincidental.”

Karl Brauer, executive publisher of Kelley Blue Book, hit the nail on the head with regard to this news when he said, “It’s likely Ford didn’t realize the timing of the Bronco’s debut, as that aspect of the Bronco’s history is not one I imagine Ford celebrating. Unfortunately, unless Ford changes the date, it will be the lede, or at least a reference point, in every Bronco debut story.”

Hell yes it is. That is one prediction that you can take to the bank… preferably on the I-405 in Southern California.