If you’re not already familiar with 20-year-old Bay Area native 24kGoldn you need to put this bro on your radar right TF now because this dude is already wise beyond his years. Just by listening to him talk for a few minutes you get the sense that 24kGoldn is prepared for the incredible amount of fame that’s coming his way and he’ll be able to handle it and his career will continue thriving.

He sat down with the Whistle YouTube crew for a ‘Cheat Day’ feature where he talked about everything from the top 5 artists he most wants to collaborate with (dead or alive), his first experience with chicken and waffles after chasing it his whole life, what a typical work day looks like for a 20-year-old music prodigy, his favorite aspects about performing, backstage rituals, how the sport of basketball is like therapy, and more. I’ve got some quotes below but hit the play button that YouTube video above because you’re about to become a 24kGoldn fan if you’re not already.

I found the portion of the interview where he discussed Basketball as almost a form of therapy incredibly relatable. Not because I’m into basketball, but because it’s important that we all have these outlets in our lives where we can go to shut off our brains for a few minutes and block out the outside world.

I love basketball for my cheat days because you have to get your head in the game. I’m an aggressive basketball player. I’m in the paint. I’m grabbing all the rebounds. Throwing an elbow or two. But if you really want to play a good game of basketball your mind can’t be anywhere else but in the game and on the court and focusing on what’s going on with you and the players around you.

It’s like meditation, it’s a little therapeutic, it takes your mind off of the ‘oh, well we got this song coming out and I have to promo this and that.’ It just lets me have fun. I’m still a 20-year-old kid, like I still have to have fun.

24kGoldn is so much more than just a rapper. He’s a singer, writer, actor, and rapper. So when they asked him about the top five artists dead or alive that he’d most want to collaborate with it’s interesting that he chose artists across a few genres of music. His list included ‘Kanye West, Drake, Michael Jackson, Bruno Mars, and Beyonce’ which is a pretty solid Mt. Rushmore of Artists.

One thing that cracked me up is how this bro straight-up described his life in school as being like Hannah Montana and that he loved every second of it:

The school-rapper balance, the closest analogy I can give you is like Hannah Montana. For real. Because I was really in the daytime like studying in the library and going to classes and then boom, in the nighttime I’m popping out and performing at clubs, I’m recording music. It was just the best of both worlds, for real.

One portion of the interview that was almost unfair is when they asked him to ‘Start, Bench, Cut’ three NBA players and then threw out Steph Curry, LeBron James, and Giannis Antetokounmpo. That’s evil. That’s an impossible question. But given that he’s from the Bay Area, he had to go with Curry as the starter:

Ugh, why are you doing this to me?? I’m going to switch it. I’m going to start with Curry because of Bay Area, had to, and then LeBron will come off the bench because he’s LeBron and if I cut him I would be an idiot. And Giannis, even though I love you and I play as the Bucks in NBA 2K almost every time, I’m sorry but you’re going to have to get cut.

The opening portion of the interview was all about Chicken and Waffles which, when done right, is on my list of the all-time greatest breakfast (and late night) foods. I didn’t have truly great Chicken and Waffles until I moved to NYC and started eating at Famous Amy Ruth’s on the regular. Up until that point in my life I’d had it at weddings as a passed appetizer, I’d had it at buffets where it was always done poorly, at restaurants that never really seemed to care about it as a flagship dish. But Amy Ruth’s was a revelation for me just like Los Angeles was for 24kGoldn:

Now hit that play button on the video above if you haven’t already! This dude is going to be everywhere soon! Hit him up on Instagram at @24kGoldn and connect there too! 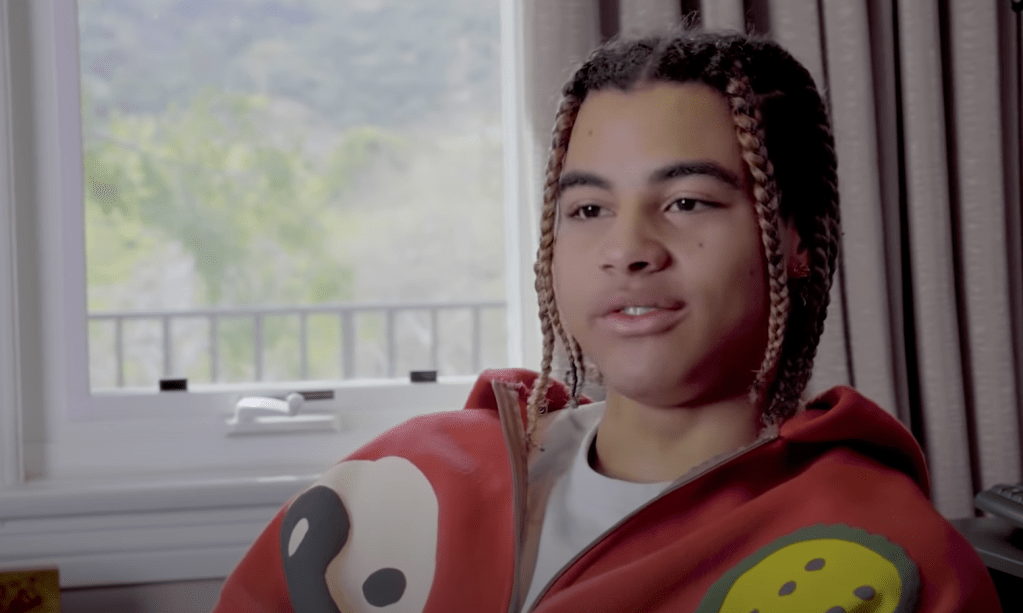