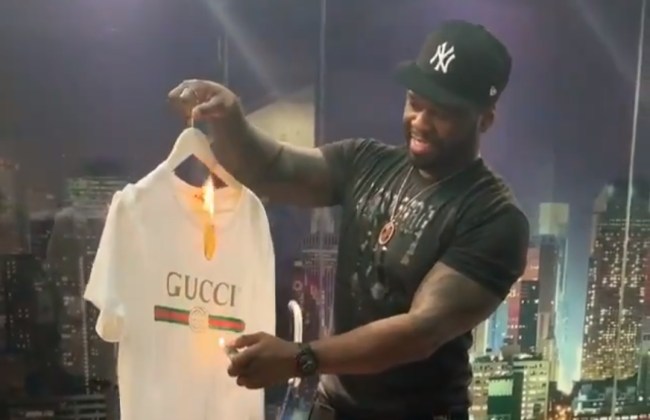 On Wednesday, 50 Cent gave his thoughts on the Gucci controversy where one of their sweaters was deemed to be inappropriate by many. The $890 designer brand wool balaclava jumper from Gucci’s Fall Winter 2018 runway was said to represent “blackface.”

Celebrities such as T.I., Soulja Boy, Russel Simmons and Dapper Dan have called out Gucci and even asked for a boycott of the Italian fashion brand.

Smh what is this man? 🤦🏾‍♂️ no more @gucci headbands for me. Who’s responsible for this? Because it’s not funny! At all!

RELATED: In The Ultimate Troll Move, 50 Cent Is Reportedly Trying To Buy All Of Ja Rule’s Master Recordings

Gucci issued an apology for their sweater. “Gucci deeply apologizes for the offense caused by the wool balaclava jumper,” the company said in a statement. “We consider diversity to be a fundamental value to be fully upheld, respected, and at the forefront of every decision we make.”

Since the “blackface” controversy erupted, Gucci chief executive François-Henri Pinault has pledged to increase cultural-sensitivity training for employees to ensure that products don’t offend the African-American community. “We didn’t understand the sensitivities of the African-American community, which is reflected in that mistake,” Pinault said. “We can’t be content with saying we’re sorry.”

Gucci deeply apologizes for the offense caused by the wool balaclava jumper.
We consider diversity to be a fundamental value to be fully upheld, respected, and at the forefront of every decision we make.
Full statement below. pic.twitter.com/P2iXL9uOhs

50 Cent did not accept the apology and proceeded to burn one of his $480 Gucci T-shirts in an Instagram video. The rapper added that he is donating all of his luxury Gucci clothing to the homeless because he refused to ever wear the brand anymore. “Yeah I’m gonna pass on Gucci, I’m giving all mine to the homeless so the right demo can wear it,” he said.

I gotta get rid of all the Gucci I have at home. I’m not supporting their brand anymore. #bransoncognac #lecheminduroi #bellator

One person who wasn’t boycotting Gucci was Floyd Mayweather. The 41-year-old boxer went on a Gucci shopping spree with his entourage and bragged about his Gucci life to TMZ. “I’m not no follower, I do what the f*ck I wanna do,” Mayweather told TMZ.

Earlier in the week, Katy Perry drew criticism for her line of shoes that many deemed to be “blackface.” Katy Perry’s fashion line removed these ugly ass shoes.

RELATED: 50 Cent Bought 200 Front Row Seats At Ja Rule Show To Leave Them Empty Is The Most Petty, Most Amazing Troll