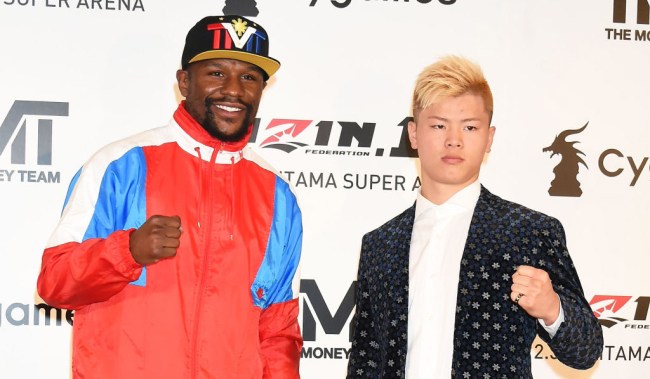 About the only surprising thing about 50 Cent making fun of Floyd Mayweather for bizarrely announcing then backing out of a fight with Japanese kickboxing sensation Tenshin Nasukawa are the fact that Conor McGregor didn’t beat him to it.

There seems to be little in life that 50 Cent likes more than mocking those people he doesn’t like as he has always taken every opportunity to do so. We’ve seen him do it to Ja Rule, Jay-Z, and Conor McGregor, but by far, his favorite target is “Money” Mayweather.

He already weighed in on Mayweather’s announcement of his fight with Tenshin Nasukawa saying, among other things, that Floyd was only taking the fight to pay the IRS.

And now, with the very, very odd announcement that Floyd Mayweather claims he was duped by RIZIN, the organizers of the event, and the fight won’t be happening, you knew 50 Cent would have something new, and derogatory, to say about the undefeated boxing champ.

He did not disappoint.

Writing on Instagram, in a now deleted-post, 50 Cent said, “Ok cool they tricked him. Was trying to kick him in the head and sh*t. He fell for it because it’s time to get some money.”

Then he wrote, “The biggest fighter in the world don’t announce a fight with out a contract. He did a press conference … now he saying there was no deal. LOL.”

Not sure why 50 Cent deleted that. He was 100 percent right and pretty much just said what literally everyone else on the internet was saying.

Floyd Mayweather: i never agreed to a fight vs teshin

Floyd "I never agreed to this" Mayweather pic.twitter.com/Ta6j2FZRL1

So, Mayweather isn't fighting Nasukawa, it appears. It was @JamesGoyder who told me Rizin had the money to pay Floyd for a presser appearance, but not a fight. Nailed it. pic.twitter.com/y4vhOTg9hB

Me trying to process Floyd Mayweather's Instagram post where he says that a fight against Tenshin Nasukawa for RIZIN on NYE isn't in fact happening at all. pic.twitter.com/ItF8dU2Rhy

We just played the audio of the presser from Mayweather where he talks about giving back to the Japanese public and putting on a show for them. The idea of a bout with Nasukawa being a private exhibition is nonsense.

Then again, maybe this was the reason for him pulling out of the fight…

LOL Rizin tried to pull a fast one on Floyd Mayweather because they know he can't read.

And in case you missed it, Mayweather actually said that he had “never heard of [Nasukawa] until this recent trip to Japan” and yet…