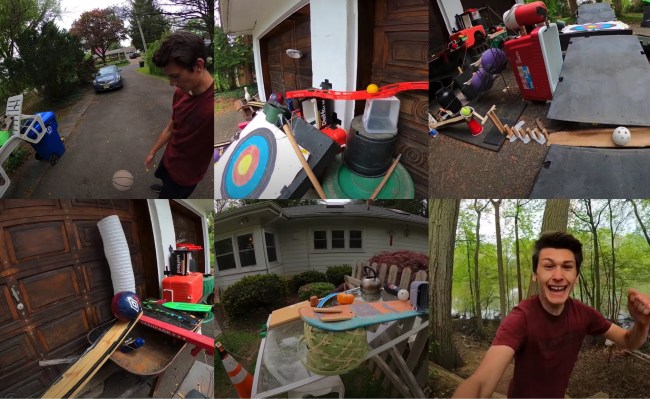 This is one of the most complex Rube Goldberg Machines I’ve ever witnessed but what’s almost equally as impressive to me is the camerawork here. The entire shot of this 70-step Rube Goldberg Machine that spans across an entire property and culminates in a basketball trickshot was all filmed in one shot.

I would legitimately love to see the outtakes of this buildout and practice, to hear about how long it took to get this right and how many hours were spent cleaning it up. Setting up a Rube Goldberg Machine this complex surely would’ve taken weeks (if not months) to get it right but the cleanup must’ve been exhausting. In the video’s description, he says it took ~1 month to build and another month to actually get this thing to work.

I came across this video on Twitter after it was tweeted out by some random account but this originally comes from the YouTube channel ‘Creezy’ (subscribe there) who said he used his entire yard to swish a basketball trick shot after 70 steps. What he fails to mention is his backyard is enormous and this is one of the most complex builds most of us have ever seen.

Just when you think this video might be about to end it keeps on going, and going, and then it goes some more.

This was initially uploaded to YouTube about two weeks ago but appears to have exploded in popularity over the past 24 hours. I even saw the SportsCenter account tweet the video last night since there isn’t really enough live sports happening to fill a full day’s worth of news for them.

This dude deserves every second of virality and every view he gets because this is wildly impressive. Everyone should 100% consider hitting that ‘subscribe’ button on his YouTube channel or that ‘follow’ button on his IG account.