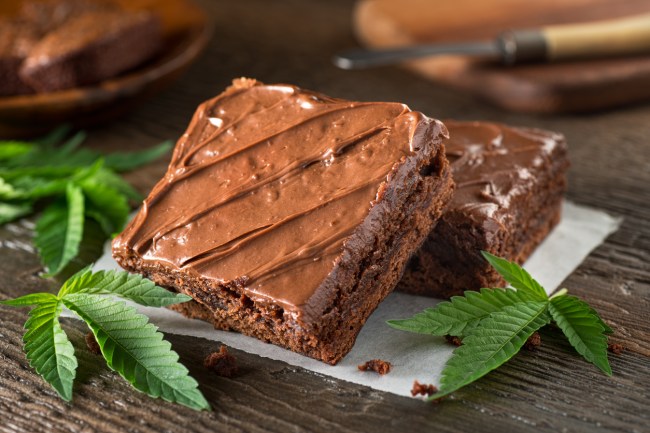 We take you to Canada because where else would we take you for a story about hockey and weed? Keith Redl’s 8-year-old grandson was playing in a Grande Prairie Minor Hockey Association tournament in Dawson Creek, British Columbia last weekend. To raise funds for the youth hockey league that caters to players aged seven to eight, they ran a raffle with various prizes.

“Each team is usually responsible for putting a gift basket or prize package together with a minimum value of $50,” Redl told CTV News. “And then what they do is they have a big setup, and they have a paper bag taped in front of each one of these prizes.”

The boy’s father bought $10 of raffle tickets and let his son pick what prize he wanted. The 8-year-old boy put his tickets in front of a prize package that he believed was boxes of chocolates. They were chocolates, but they were chocolates that were infused with cannabis. So it’s magic chocolate.

“So, he went, and it was $200 worth of marijuana and marijuana edibles,” said Redl. “He sent me a picture before he even left Dawson Creek because he couldn’t believe that this was a prize at a kid’s hockey tournament.”

There was chocolate fondue flavored sativa cannabis chocolate and vanilla chai edibles. Kids have it so good these days, do they understand what we had to do to get even a toke of terrible weed back in the day?

All of the pot products in the prize pack appeared to be legal, and were stamped with the red, octagonal THC symbol of legal cannabis in Canada.

Redl said the gift baskets usually feature family-friendly items such as “tickets to the movies, card games, popcorn and candy or age-appropriate board games.”

“My grandson thought he won a great prize,” Redl said. “‘Dad, I won chocolate!’ ‘No, son, there’s bad drugs in the chocolate.’ How do you explain that to a kid?”

“Part of the campaign the government used to legalize it was to keep it out of the kids’ hands,” said Redl. “How is advertising it and promoting it at an eight-year-old kids’ hockey tournament trying to keep it out of kids’ hands? There’s obviously some very serious flaws in the legislation that even allows this to take place.”

The Dawson Creek Minor Hockey Association confirmed that they did give out cannabis edibles, but noted that the THC chocolate was never on display during the tournament, only a photo.

“The raffle winner was told the basket contained cannabis products and was given the option of not accepting the prize,” the Dawson Creek Minor Hockey Association said in a statement. “The winner chose to take the prize, their identification was checked to ensure they were of legal age, and the donor took them outside the event to deliver the basket.”

“It was not our intention to upset any of the attendees at the event, and we apologize for anyone who was offended by the prize,” the statement reads. “The tournament is organized by volunteers, and their objective is to have a fun tournament and raise money for DCMHA to allow hockey to be more affordable and more inclusive.”

“The raffle winner was told the basket contained cannabis products and was given the option of not accepting the prize,” the hockey league said. “The winner chose to take the prize, their identification was checked to ensure they were of legal age (19+), and the donor then delivered the basket to the winners.”

“I was a policeman for 32 years, and you try to protect people from stuff, and then your eight-year-old grandson brings up running into this, it’s just ridiculous,” Redl said.

Many have pointed out that they have seen other youth sports auctions that contained alcohol in them, which was just as legal as the marijuana as long as only adults are allowed to pick up the prize. “Booze baskets are huge fundraisers for minor hockey teams. Good ones raise in the neighborhood of $2,000-$2,500,” said one writer.

Booze baskets are huge fundraisers for minor hockey teams. Good ones raise in the neighbourhood of $2,000-$2,500