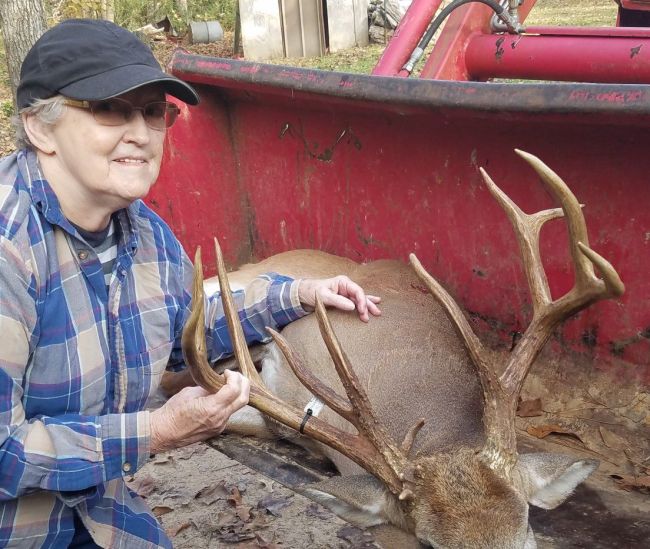 White-tailed deer season runs from early November until late January in Texas and Virginia Luce got in on the action. Luce, a FOUR-time cancer survivor worked for 25 years as a registered nurse and retired just two months ago. She’s an absolute delight. The 80-year-old spends her days on an 80-acre property, on which she and her husband built their home back in the 1980s, and hasn’t missed a season opener in years.

The couple’s land is located adjacent to the Davy Crockett National Forest in Kennard, Tx., which spreads more than 160,000 acres in their backyard, and the family has been given the green light to hunt in the woods.

“It’s a pretty good spot,” she told the Dallas News. “My husband and I have hunted and fished together for our entire married life — 63 years. “I usually kill a buck every year, but we don’t allow anyone to shoot the momma deer. The way I see it, if you leave the girls alone, the boys will come.”

However, she can’t get up in a deer blind like she used to and had to pivot her hunting strategy over the last few seasons. Luce and her husband keep the corn feeders full throughout the fall and rely on game cameras to watch them while they sit in the kitchen.

“I do all my hunting from the house now,” she said. “My kitchen is my deer stand. We take the screen off one of the windows every fall. I can see a pretty good ways from there.”

She always keeps her rifle close by during deer season and the window sill makes a good barrel rest when she needs it and last month, she did. Early in November, Luce was making lunch for the two of them and noticed a buck on the edge of the forest about 175 yards out. She didn’t waste any time, set the gun on the window, found her shot through the scope and pulled the trigger. Luce nailed it.

“It was a really big buck,” she said. “We’d seen him on our game camera at a feeder a few weeks back, but that was the last deer I expected to show up right here behind the house.”

Her husband was watching television in the living room and didn’t know that his wife was tracking a buck until the gun fired. The buck scored 11 points and Luce claims it is the biggest she’s ever shot.

“She watches them all time when she’s in the kitchen,” he said. “Right after the shot she hollered, ‘Well, that was the big one, Daddy.’ That’s when I put my boots on, got on the tractor and went to load him up. He didn’t go far. She doesn’t miss very often.”

It’s not every day that you hear about an 80-year-old woman shooting a big buck deer, let alone out of her kitchen window. Keep living it up Luce!