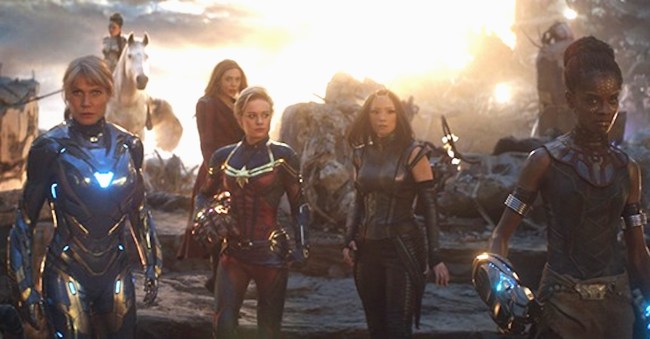 One of the biggest fan service moments in Avengers: Endgame is being turned into an entire movie, according to recent rumors.

Warning: spoilers for Avengers: Endgame will follow (although, seriously, if you haven’t seen the movie and are clicking these articles, what the hell are you actually doing?)

In the climactic battle in Avengers: Endgame, Captain Marvel, Scarlet Witch, Pepper Pots, Valkyrie, Okoye, Shuri, and Mantis all find themselves together to fend off Thanos’ force, leading to one of the film’s biggest fan-favorite moments.

With the Marvel Cinematic Universe having been around for over a decade and the roster of female superheroes more than filled out, the time is now for the A-Force — the all-female version of the Avengers — to be fully fleshed out.

And according to recent rumors, that’s exactly what Marvel Studios is doing, as the film is rumored to be in development.

While a script still hasn’t been written, the studio has taken pitches already and according to our sources the plot as it stands right now (things can always change as it gets closer to entering production) will see the entity Singularity summoning many of the MCU’s greatest female heroes to help save the world from the cosmic villain Antimatter.

The reason this plotline is already hashed out apparently is because it’ll be set-up in Captain Marvel 2. Specifically, we’ve been told that both Singularity and Antimatter will appear or at least, be teased, in the Brie Larson-fronted sequel. [via We Got This Covered]

Given the massive success of Captain Marvel and the general public’s desire for more female-led superhero films, an A-Force film in the Marvel Cinematic Universe is merely a matter of when, not if.