A History Of How, Why, And When The USA Rebranded As ‘America’ 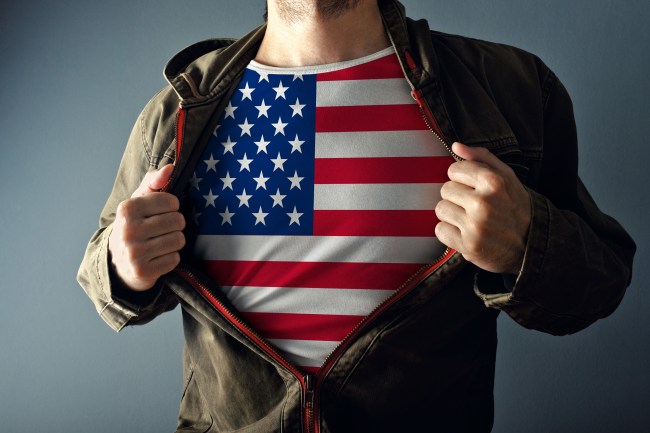 “Patriotism is the virtue of the vicious.” – Oscar Wilde

Anyone who tells a Canadian, Mexican, or Argentinean native that they are not American might find themselves in a heated debate. Because technically, everyone who resides in North and South America is, by definition, a real American. But the United States has sort of trademarked the term as a generalization. Some might argue that’s because the nation’s hot dog eating, beer-drinking, baseball watching, Walmart-shopping culture gives them that right because we are the greatest country in the world and, you know, these colors don’t fucking run, brother! Only that’s not the reason at all.

The United States didn’t always go by America, and its people were not always considered Americans. Not even our forefathers thought that this made any sense. When addressing the nation, President George Washington used to speak in terms of “the United States” and “the Union,” but never, ever mentioned America. Because back then, the word meant a whole lot more than thirteen measly states.

It actually wasn’t until the United States started dipping its toe in the ethos of imperialism that it began trying to come up with a stronger name. Everyone involved all agreed that the country needed a brand with more balls; something that would really tell the world that we were becoming a monstrous authority and were not to be messed with. According to historians, lots of titles were kicked around, but the term “America” really just rolled off the tongue. Teddy Roosevelt was the first president to start telling the people that they were “Americans” and every president since has followed suit.

Calling ourselves Americans, for better or worse, has been permanently tattooed in our amber waves of grain with songs like “God Bless America.” Presumably, the composer of the song, Russian immigrant Irving Berlin, didn’t give a screaming crap which part of America God blessed, as long as it provided him refuge from anti-Jewish pogroms. And, of course, as long as the check cleared. It’s not like Americans really gave a damn about him or his song anyway. Most didn’t even accept it as part of the soundtrack to the red, white and blue way of life until the U.S. went after the Nazis. By World War II, though, the U.S. (I mean, America) had embraced the tune, and now it’s impossible to see a Yankees game without hearing it. Country music also borrowed some lyrical inspiration from Berlin, and now, rather than singing about booze, women and hangovers, every song seems to be a pseudo patriotic nod to God and Country.

Some parts of the world have accepted America as property of the United States. The French refer to us as Americans, but it could be argued that’s only because they do not have a dog in the fight. They are not from a continent that technically makes them American, yet by some strange twist of nomenclature, they are disqualified from being considered Americans. Canadians, however, don’t give a damn. Most of them would never call themselves Americans even if they were told they could. Neither would Brazilians for that matter. In fact, while some countries like to make fun of the U.S. for having the arrogance to designate a title to a land intended for an entire continent, most of the squabble has more to do with political correctness than anything else.

Truth be told, while the term is problematic for some, not a lot of South Americans want so desperately to be known as Americans. They have their own identity that they are perfectly content with.

It’s really all about sensitivity and semantics, which, as we’ve learned over the years is enough to get the hard-o’s of the world nine kinds of riled up. So don’t think for a second that there couldn’t come a time when the term America comes under fire for being insensitive to parts of the planet deserving of the same distinction. And when that happens, oh boy, watch out.

As we’ve seen over the past few years, trying to dismantle icons of heritage, even when that heritage is embarrassing and no longer relevant, gets a lot of people fired up and itching to fight.

But don’t worry, nothing like that is bound to happen – not anytime soon. After all, the people of the United States have a decent argument for wanting to keep calling themselves Americans. Canadians, Mexicans, Brazilians, Columbians, Argentineans all have names that have a nice ring to them. But something like United States-ians, for example, makes my ears bleed. So does U.S. of A-ians. Listen, anyone wanting to play the political correctness card with all of this American stuff could always refer to themselves as North American or South American – both are contextually accurate and still glide off the tongue nicely. It’s not that deep. Shortening is just what Americans do. It’s a place where Led Zeppelin is often referred to as “ Zep,” Motley Crue is “The Crue,” and we’re chock full of abbreviations from the CIA to OMG. As an unofficial diplomat for the American people – the smart ones at least — I urge all of those offended by our sawed-off baptism to move on to something more substantial. Trust me, you are doing far better than us in the grand scheme of things.