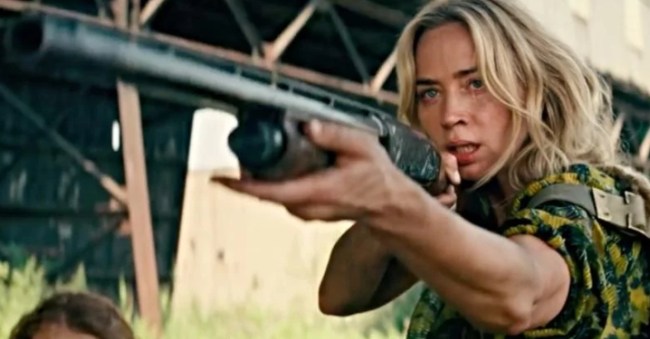 The first official trailer for A Quiet Place Part II has been unleashed by Paramount Pictures, and it is ready to freak you the EFF out. The aliens are back and as vicious as ever, but unfortunately for them, so is Emily Blunt.

The trailer for the sequel for the 2018 horror-thriller flick shows “Day 1” when the aliens have launched a full-blown attack on the humans, and an alien invasion makes for some perilous driving conditions. The post-apocalyptic world becomes treacherous, where making one sound could end your life.

Emily Blunt’s shotgun-toting character Evelyn Abbott is ready to do whatever it takes to protect her children (Millicent Simmonds, Noah Jupe). But it isn’t just the aliens who are dangerous, there are humans who have become cut-throat monsters. “The people that are left are not the kind of people worth saving,” Cillian Murphy says in the trailer.

“Following the deadly events at home, the Abbott family (Emily Blunt, Millicent Simmonds, Noah Jupe) must now face the terrors of the outside world as they continue their fight for survival in silence. Forced to venture into the unknown, they quickly realize that the creatures that hunt by sound are not the only threats that lurk beyond the sand path.”

Spoiler alert: John Krasinski’s character Lee Abbott probably won’t be in the movie except for some flashbacks, but John Krasinski returned to write and direct A Quiet Place 2. The film also stars Djimon Hounsou, from Captain Marvel and Guardians of the Galaxy.

The original A Quiet Place was a shocking success that had a $17 million budget and earned $340 million at the worldwide box office, plus has a 95% score on Rotten Tomatoes.

A Quiet Place: Part II crawls into theaters on March 20.