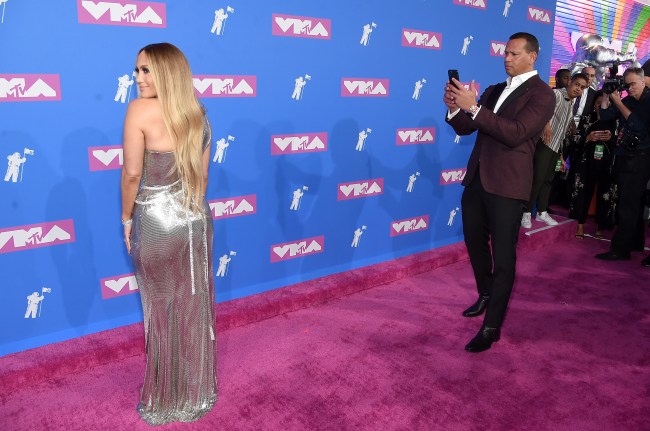 There’s a solid chance you were doing anything else in the world last night other than watching the VMAs. If you weren’t watching then you missed out big because A-Rod’s reaction to his girlfriend Jennifer Lopez dancing on stage was one of the best instant memes of 2018.

The awards show has lost most of its relevancy over the years due to the precipitous decline in actual movie videos being played on MTV. Seriously, when is the last time you even watched a music video that wasn’t on YouTube? It might’ve been in the late 90s or early 00s for me. At a time when TRL was still on the air and Jennifer Lopez was one of the most active performers on the planet.

A-Rod and J-Lo are dating. You already know this. They’re what the media likes to call an ‘it couple’ or a ‘power couple’ but we can cut through the bullshit and just admit that these two run the world.

They’ve probably got over a billion dollars between them in the bank, both are A-list celebrities, and they’re very obviously in love.

The 2018 MTV VMA Awards sort of wrapped up with Jennifer Lopez performing a lengthy medley of all her popular songs throughout the years. She wasn’t wearing a whole lot of clothing for the performance and her boyfriend A-Rod was loving every minute of it.

At one point during the performance, J-Lo was bouncing her rear end around on high-speed when the TV camera panned over to A-Rod who had his iPhone out filming J-Lo and looking like a goofy dad. I actually had the VMAs on the TV at that moment and I looked over and said ‘that moment will become an instant meme’. I was right.

The memes have been flooding in all night and I wanted to share a few of the best.

Here’s the video of the full interaction:

Get a man who looks at you the way A-Rod looks at his phone while recording J-Lo #vmas pic.twitter.com/zHC3CM8Tjv

Now for some of the best memes of the moment. There are A LOT, and I couldn’t find them all unfortunately because Twitter doesn’t have a good way to reverse search images like Google does so you have to search for things like ‘A-Rod’ and hope that someone put him in the text:

When the memes are Good. pic.twitter.com/rot8cDH2FA

Find someone who supports you and looks at you the way A-Rod looks at JLo. #vmas #jloVMAs pic.twitter.com/lODL23bqqH

A-Rod at the VMAs next year: pic.twitter.com/ASbzC6xCHt

Also this is A-Rod in the audience #VMAs pic.twitter.com/Jkj7W6aDjk

Me, every weekend, betting Man City from now until the end of the 2018-2019 Premier League:

When the over hits pic.twitter.com/CTZC5KlR2L

me admiring your tweets pic.twitter.com/dB4oEjWbD4

Just an embarrassment of riches:

Here’s a GIF of the exact moment A-Rod became a meme last night in case you want to save it forever:

We could keep looking at these memes until the cows come home but I think you dudes get the point.

You can find me on Twitter at @casspa if you’ve got an A-Rod meme that you think should be included here. Or if it’s on Instagram you can use the hashtag #BroBible or tag the @BroBible account and I’ll find it at some point throughout the day.