A Sausage, Egg, And Cheese You Can Eat Anywhere – How Smithfield Power Bites Are Changing The Game 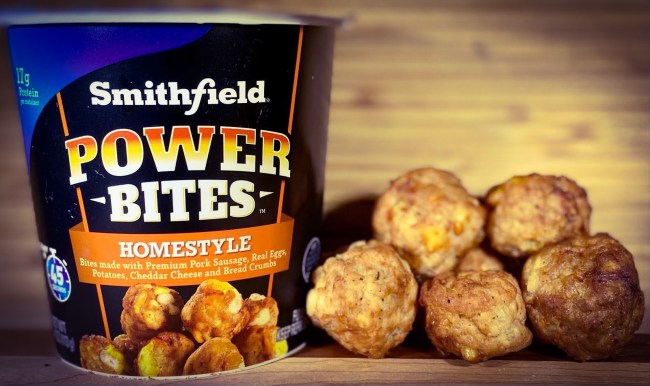 The earliest humans spent the majority of their existence hunting and gathering for literally any sustenance that allowed them to make it to the next day. Then, they’d wake up and begin that endless cycle once again. But, thanks to the progress mankind has made over the past couple of hundred thousand years, we’ve reached a point where we can rely on the three major meals traditionally eaten at certain points throughout the day— a development I can’t say I’m a huge fan of.

I have a fair amount in common with our ancestors, as I’ve never really gotten on board with the whole “breakfast, lunch, and dinner” thing that society decided to make the norm at some point in history. I also do a fair amount of foraging and scavenging myself—although it mostly involves me searching inside my cabinets and fridge for small bites throughout the day.

I’ve reevaluated my eating habits on a few occasions but I still refuse to waste valuable minutes I could devote to sleeping on the preparation of a hearty breakfast. My hard-dying snacking habits also continue to serve as a substitute for lunch, but with that said, I’ve been on the hunt for something capable of providing me with a bit more fuel than I needed when the most strenuous part of my daily routine was the walk from my computer chair to my couch at the end of a strenuous day of writing things on the internet.

Thankfully, I recently found what I’ve been looking for in the form of Smithfield Power Bites.

In a perfect world, I’d wake up every day and be greeted by some freshly prepared breakfast meats and scrambled eggs with just the right amount of cheese. Sadly, my aforementioned love of sleep (and fear of indoor grill-related foot injuries) has made that a largely infeasible goal.  However, it’s decidely more achievable when the only thing standing in my way is the ability to run my microwave for the 45 seconds it takes to prepare a cup and resist the urge to dig in before the one-minute cooldown comes to an end. You don’t even need to worry about having to wash utensils when you’re done, as you can eat them anywhere right out of the container if you’re in the need of an on-the-go option (whether you’re venturing out into the real world or simply making the trek to a different room in your home).

As someone who’s never bought into the idea that specific foods should be reserved for certain times of the day, I’ve also started to use Power Bites to replace the handfuls of peanuts and the overpriced beef jerky I largely relied on to stockpile the energy required to meet the demands issued by the virtual cycling instructors that I feel weirdly obligated to avoid disappointing even though they actually don’t know I exist. I also feel much less of a need to force down the chalky protein shakes I subjected myself to for far too long, as each serving boasts between 17 and 19 grams depending on which variety you’re in the mood for.

Every Power Bite is made with premium pork, real eggs, and cheddar cheese and contain no MSG or any artificial ingredients. The folks at Smithfield were nice enough to dream up three different flavor combinations to pick from—all of which were subjected to one of my famously rigorous taste tests they each managed to pass with flying colors. In the end, it was tough to decide which ones deserved the medals I’ve presented them with, but life is filled with difficult decisions and only one could come away with the gold in the end. 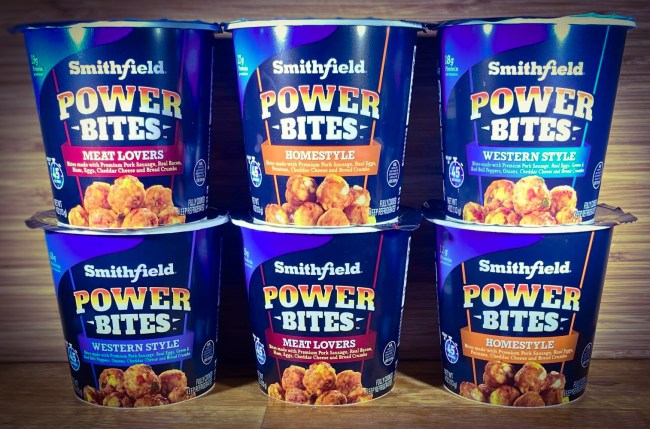 Before I delve into the specifics, I should probably give you a quick rundown on exactly what Power Bites are. When I first heard about them, I had no idea how it was possible to combine everything they contain into a finger food but Smithfield managed to do exactly that in the form of bite-sized morsels that kind of look like meatballs but are packed with significantly more flavor than any that I’ve come across.

Now that you’ve completed that crash course, let’s proceed to the main attraction.

This particular option is basically the Power Bites Starter Pack, so if you want to get familiar with them, there’s no better place to begin. It features all of the essential elements of your standard diner breakfast, only instead of having to spend 10 seconds trying to wrangle all of the foods on the plate onto your fork to create a scrumptious combo, you can just grab one and pop it into your mouth.

The Homestyle variety is incredibly well-rounded and you can not only taste all of the ingredients they feature in every single bite but actually see the sizeable chunks of sausage and potato that comprise them once you indulge—which is exactly what I did when I devoured the entire cup despite having every intention to save room for the following two offerings.

Thankfully, I was able to persevere.

When I inevitably get rich and famous by writing things on the internet, one of the first things I’ll do is hire a private chef to greet me every morning with one of those omelette stations that serve as the crown jewel at any hotel breakfast and brunch buffet worth its salt. However, until that day arrives, I’m more than happy to turn to the Western Style Power Bites as a more than suitable alternative. 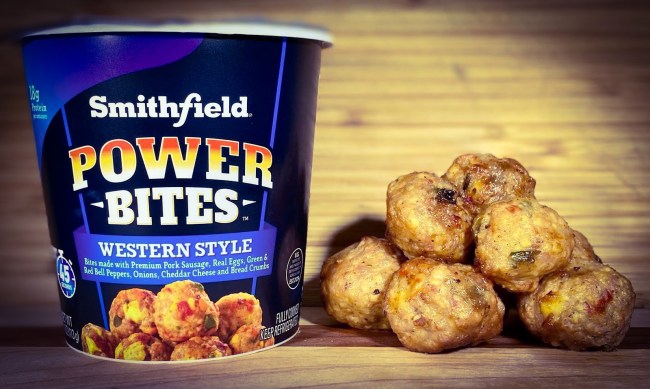 The combination of ingredients here are all part of my go-to omelet order, and after taking my first bite, I was magically transported to one of those mornings where all of life’s problems temporarily disappear courtesy of a plate filled to the brim with more meat and pastries than any person should consume in one sitting.

If you’re a fan of breakfast burritos, these will also do the perfect job scratching that itch without having to do the legwork traditionally required to get your hands on one. Pro tip: if you really want to kick things up a notch, I highly recommend throwing a few dashes of hot sauce in the cup when it comes out of the microwave. Feel free to thank me later.

It’s rare for me to consume a meal that doesn’t involve some sort of meat, and as a diehard carnivore, the idea that something can contain an excessive amount of it is like saying it’s possible for a basketball game to have an overabundance of dunks; in both of those cases, it’s patently absurd to suggest you can have too much of a good thing. 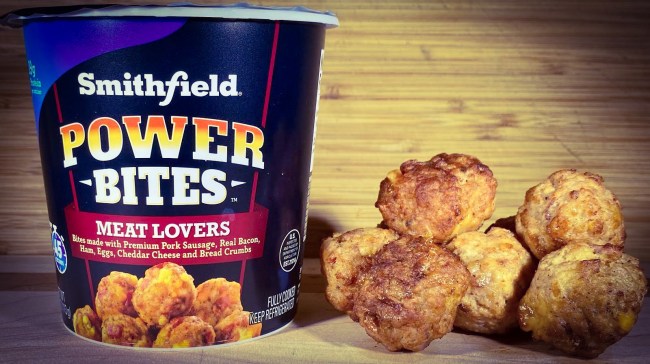 As a result, I have a tendency to literally check all of the meat-related boxes when ordering a pizza and the Meat Lovers option did the same when it comes to what I was looking for in any product that features that label on the packaging. The sausage is definitely the star of the show here but the bacon provides a nice, subtle smokiness and the ham helps take them over the top.

Power Bites easily earned my much-coveted seal of approval, but if my opinion isn’t enough to sway you, I’d like to close this out with an anecdote that should.

I work from home, but my wife is a nurse who has to wake up at a truly absurd hour for a commute that is much more involved than the ten steps it takes me to get from the bed to my desk. She’s constantly on the hunt for something she can quickly whip up in the morning and was very eager to help me sample the wares after the aroma my taste test generated lured her into the kitchen. After digging in, she informed me, “These are mine now,” so if you’re someone with a busy lifestyle looking for a transportable option, I can’t think of a more ringing endorsement.