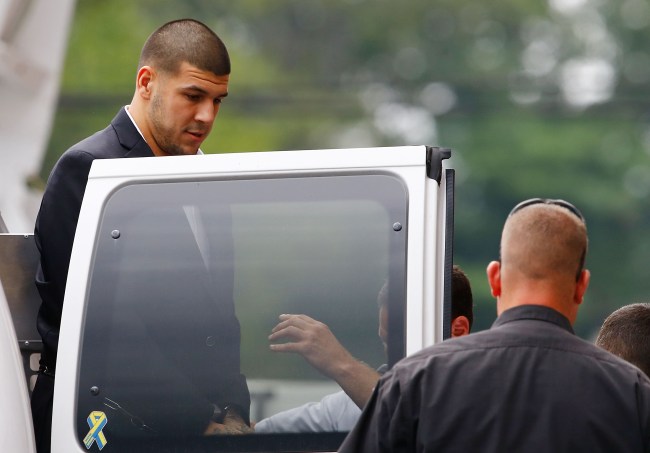 The Boston Globe Spotlight team has uncovered some wild revelations about Aaron Hernandez and the circumstances surrounding his death. We’ve already learned that Aaron Hernandez actually wanted to be a cheerleader, but his “deeply homophobic” dad stomped out  that idea in its tracks. Hernandez also had a sexual relationship with his high school quarterback and went to great lengths to hide it. And finally, we learned that Hernandez had been physically and sexually abused as a child.

A new report from the Boston Globe says the autopsy performed in April 2017 that “came back negative for all substances” was false. Hernandez had reportedly used synthetic marijuana, or K2, heavily in the days leading up to his suicide.

An inmate interview with officials the day Hernandez died, April 19, 2017, was partially redacted from a 132-page public report. The hidden portion, which the Globe was able to review last week for the first time, said: “He’s spent the last two days smoking K2 in his cell and he wasn’t in the right frame of mind.”

K2 is popular with inmates because it is difficult to detect in drug tests and apparently not difficult to obtain in prison. A minimum of two inmates claim that Hernandez was using K2 extensively in celebration of his “not guilty” verdict for the double murder in 2012.

“We see many, many cases of people using synthetic cannabinoids and other novel psychoactive substances that are aggressive toward themselves,” [toxicologist Marilyn Huestis] said. “Psychosis is common.”

Religious delusions also are reported, according to people familiar with K2’s effects. Not a traditionally religious man, Hernandez had become more “spiritual” toward the end of his life, according to fellow inmates’ accounts in records.

The scene at Hernandez’s death was rife with eerie religious writings and symbols. There was religious writing on the walls. He wrote 3:16 in blood on his forehead and had the Bible citation “John 3:16” open on his desk.

Officials claim the report initially claimed that Hernandez had not been using drugs because there was an ongoing investigation involving drug use in prison.