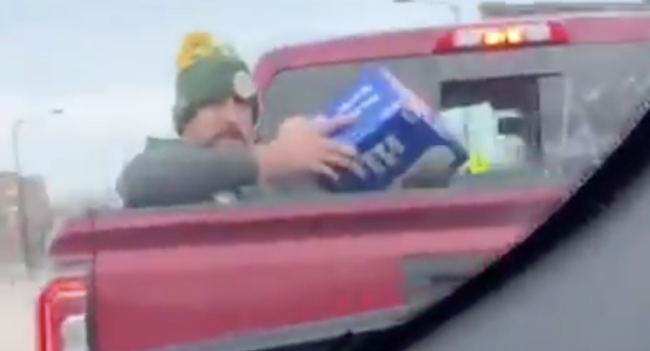 A TikTok video posted on Thursday went viral after it appeared to show Green Bay Packers quarterback Aaron Rodgers hanging out in the back of a pickup holding a case of Miller Lite while riding around Green Bay.

On “The Pat McAfee Show” on Friday McAfee asked former Packers linebacker A.J. Hawk if he thought that was Rodgers in the video.

“I absolutely think that was him. You text me that video and I instantly said, ‘Yeah, he’s riding back to Lambeau from practice,'” “That’s a little drive you have to make in your pads. You just hop in the back of somebody’s truck and obviously, I guess they had a case of Miller Lite, so why not flash it to the people filming it?”

Rodgers would later confirm that it was indeed him in the video while responding to McAfee on Twitter and that he was riding in David Bakhtiari’s pickup truck.

Ya that was me 💪🏼😂 Listen to @OfficialAJHawk and it was @DavidBakhtiari ‘s truck and soggy beer cases. How ya doin keep it movin @PatMcAfeeShow # https://t.co/P1qfRnUb2W