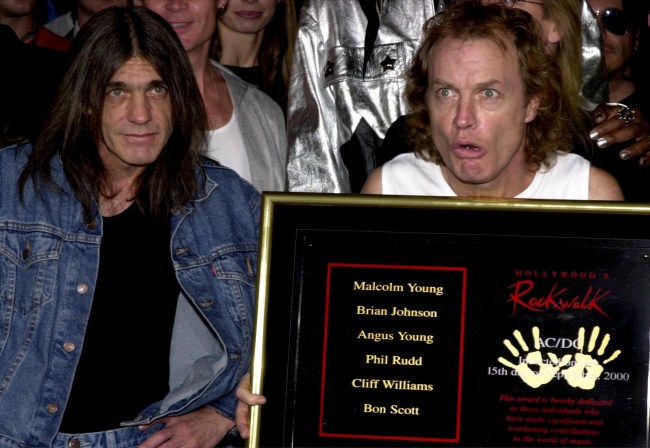 Malcolm Young, guitarist and co-founder of AC/DC, died on Saturday at the age of 64. AC/DC announced the sorrowful news on their Facebook page. The rock icon was said to have died peacefully with his family by his bedside. Young had been suffering from dementia for the past three years, the illness is the reason that he was forced into retirement. Young started having memory and concentration issues in 2010. By 2014, Young’s condition deteriorated to the point he was not on the band’s “Rock or Bust” album. On September 24, 2014, the band announced that Young would not be rejoining the band. Stevie Young, Malcolm’s nephew, replaced Malcolm on the band’s 2015 Rock or Bust World Tour. Malcolm started the band with his brother Angus Young in 1973 and the legendary heavy metal group was inducted into the Rock and Roll Hall of Fame in 2003.

“Today it is with deep heartfelt sadness that AC/DC has to announce the passing of Malcolm Young,” the AC/DC Facebook page said on Saturday morning. “Malcolm, along with Angus, was the founder and creator of AC/DC.” The Australian band known for its powerhouse riffs reminisced about their beloved brother. “With enormous dedication and commitment he was the driving force behind the band,” the statement said. “As a guitarist, songwriter and visionary he was a perfectionist and a unique man.” The announcement delved into Young’s persona, “He always stuck to his guns and did and said exactly what he wanted. He took great pride in all that he endeavored. His loyalty to the fans was unsurpassed.”

Angus concluded by saying, “As his brother it is hard to express in words what he has meant to me during my life, the bond we had was unique and very special. He leaves behind an enormous legacy that will live on forever. Malcolm, job well done.”

He is survived by his wife O’Linda and two children.