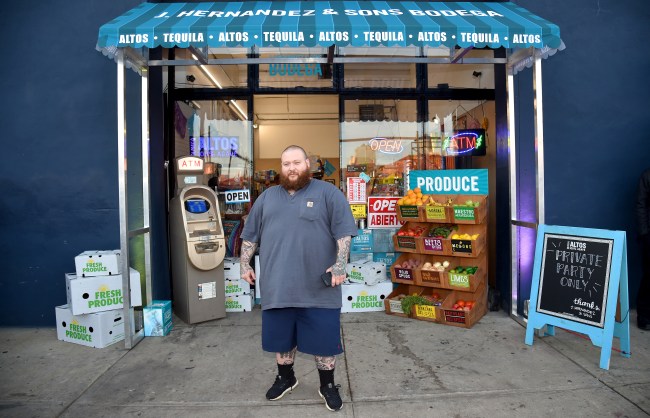 “Meet me on the terrace when you’re ready”

It was a simple invitation, but based on how it was delivered, the first words Action Bronson greeted me with sounded like a line from one of his songs, perhaps preceded by a reference to eating cappelletti with Mario Andretti or rolling around in a ‘75 Chevy with Philip Rastelli.

In 2010, a broken leg transported the rapper from the kitchens of New York City and into the city’s rap scene. Since then, Queens’ native son has been peppering his lyrics with culinary shoutouts and amazingly obscure references to sports and pop culture, all of which are served alongside his filterless sense of humor.

Bronson entered the world of hip-hop at a time when NYC was in search of new voices who could contend with those coming out of the ever-growing number of rap hotspots popping up across the country and he emerged as one of the loudest and most unique. A general distaste for hooks and a blasé approach to studio perfection resulted in a long line of masterfully produced mixtapes that showcased his raw and unfiltered approach to music. Since arriving in the spotlight, he’s balanced his newfound career with a wide variety of other endeavors, including a few of shows that gave him and his crew an excuse to travel the world, eat great food, and smoke weed.

I moved to New York around the time Bronson had started to make a name for himself, and he served as a culinary ambassador of sorts when I first arrived in the city. Before Fuck That’s Delicious was on television, I devoured the series on YouTube, and it taught me not to judge a joint for its health inspection grade and gave me the inspiration to venture into neighborhoods that caused my less adventurous friends to worry about my safety.

I’ve been to a few bucket list restaurants in NYC, and while there’s something to be said for an 11-course tasting menu at Daniel, you haven’t really experienced New York until you’ve gotten to explore its delicious and diverse proletariat offerings. As a result, I jumped at the opportunity to chat with Action when he recently returned to his hometown in conjunction with a pop-up made possible by Altos Tequila that recreated the tone of the most essential stop on a culinary tour of the city: a bodega.

Whether you call them bodegas, delis, or corner store (the rapper says they’re spiritually the same) they’re ubiquitous in the neighborhoods in New York City that aren’t occupied by tourists or people who work in finance. There’s no blanket definition, but in my experience, they’re a place selling virtually anything you could ever want in an impossibly small storefront containing aisles that barely fit a single person located on a block where shirtless guys in lawn chairs play dominoes whenever the temperature hits 70. They’re also all somehow capable of making an identical bacon, egg, and cheese.

I had my ideas of what makes a bodega a bodega before meeting up with Bronson, but I figured he’d have more insight than anyone— he basically grew up in them.

“When I was a kid, they had video games. Street Fighter. Mortal Kombat. Fucking Teenage Mutant Ninja Turtles!” His music career began when he started rapping in a glorified studio located in the basement of a corner store on Jamaica Avenue in East New York (“You know the grates on the sidewalks looking into the basement? It was literally at the bottom of the stairs”). I eventually joined him on the roof deck of his hotel in Williamsburg, where I couldn’t help but note the cultural juxtaposition as he started to point out the various delis dotting the surrounding area before I got a crash course in bodega culture.

“Bodega” might be Spanish in origin, but they’re not defined by nationality. Instead, bodegas are largely known for what they offer as well as what they don’t, which is usually advertised with a tattered and faded awning sporting a list of their wares (savvy bodega-goers know to look for “COLD BEER” before heading into a corner store, as not all of them sell booze).

If you’ve ever been drunk or poor (or both) in New York, there’s a very good chance that a bodega has at some point become your place of refuge— somewhere you can go to with $10 in your pocket and still be able to live like a king. I asked Bronson what he would do if he found himself in such a situation at 2 AM, to which he gave the only correct answer:

“Three Dutch Masters. Vanilla. And a steak and cheese. That’s all you need.”

I asked him how he felt about chopped cheese, the Harlem go-to that got a fair amount of attention after it was “discovered” by a millennial two years ago. He turned his head and squinted. “What’s that?” I wasn’t sure if he was messing with me, but after informing him that it’s basically just a deconstructed cheeseburger, he shook his head vigorously. “Nah. We don’t have those in Queens.”

I’m still not sure if he’d actually ever heard of a chopped cheese before I asked him about it.

What Queens does have, however, is something that would have sounded incredibly ill-advisable if Action hadn’t recommended it himself. It actually still sounds pretty ill-advisable, but he hasn’t steered me wrong in the past:

“There’s one place that’s just a tiny deli in the front. But if you head in the back, there’s a big room where they just serve ceviche. There’s literally a ceviche place in the back of a bodega.”

The place in question is La Esquina in Jackson Heights. If you ever find yourself on Roosevelt Avenue and craving an adventurous seafood experience, you know where to go (if you don’t want to take Bronson’s word for it, The New York Times also gave the spot their stamp of approval).

However, it’s the basics that ultimately define bodegas. According to Bronson:

“You should never pay more than 25 cents for a bag of chips. Wise and Utz exclusively. There’s people paying $1.99 a bag for those fancy chips. Get out of here… Even the Party Mix is too fancy. It’s all about the pretzel sticks. And there should just be big boxes of shit you can buy stuff from— Fruit Roll-Ups, Dunkaroos, all of that… There’s no San Pellegrino. It’s Snapple and Mistic and that’s it.”

I asked him if he’s come across the cultural equivalent of a bodega during his many travels around the globe and after spending a few seconds gazing at Manhattan in thought, one particular example popped to mind:

“There are these places in Paris that just sell bread and cigarettes. They don’t even have water. Just bread and fucking cigarettes.”

We wrapped up our conversation and I headed over to the pop-up, and as someone who largely relies on the Mexican deli a couple of blocks away from my place to survive, I was skeptical it would be able to capture the true spirit of a bodega in a warehouse in Brooklyn. It turns out I was wrong. 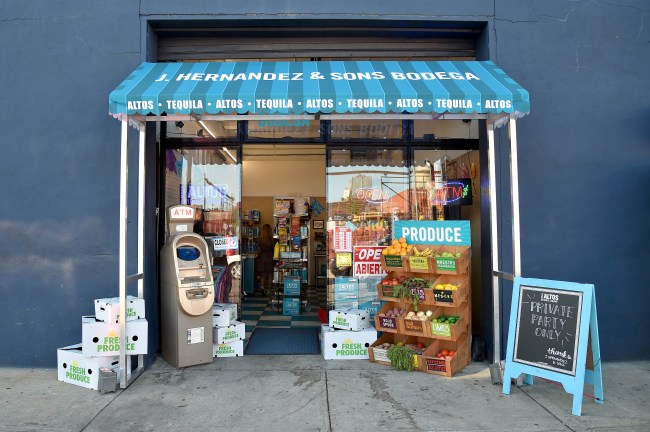 The concept is similar to Boston’s Bodega, a streetwear store featuring a purposefully dingey storefront with a showroom tucked behind a sliding soda machine. However, the pop-up’s interior was warm, bright, and immediately familiar. I had a mental checklist of the items I expected to see and was shocked by how many boxes I was able to tick while walking the signaturely cramped aisles stocked with household supplies and most of the Hispanic goods that have become a staple in my kitchen since moving to my neighborhood.

They got dinged a point for the lack of Cholula in the hot sauce section but quickly gained one back by giving you the option to stash a Tecate in a paper bag. 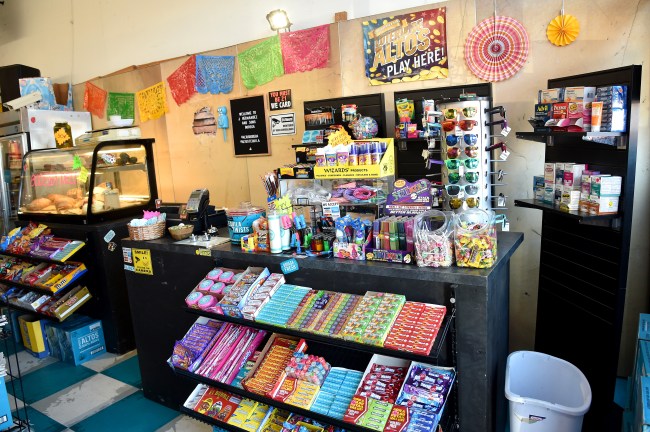 The only real thing that stood out was the lack of phone cards behind the counter, which are typically located next to a few racks of condoms with a disproportionate amount of Magnums missing and the bags of colorfully-named “performance-enhancers”— or, as Action refers to them: “Street Fighter dick pills.” However, I can understand why they might have omitted those last two. 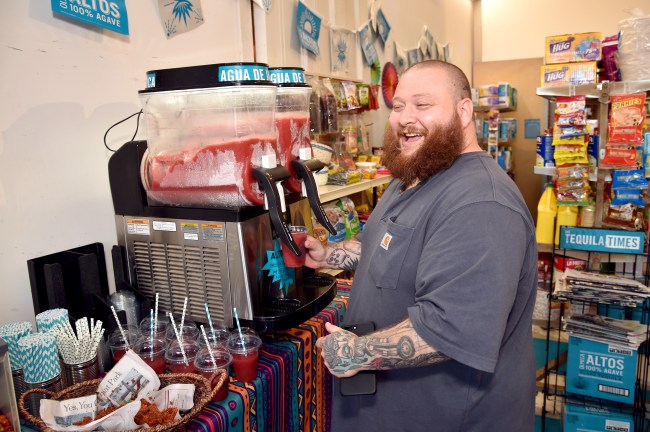 I sampled a few fancy cocktails made with Altos designed to complement the concept and couldn’t help but think back to the last thing Action said to me. As I was leaving his room, he grabbed my shoulder and pulled me aside.

“Put this in the article,” he said very seriously. “If you’re drinking tequila, the best mixer in the whole bodega is… grapefruit juice.” He paused, looking at the ceiling and motioning upwards with his arm like a ringmaster introducing a trapeze artist.

It looks like he can also add “mixologist” to his résumé.