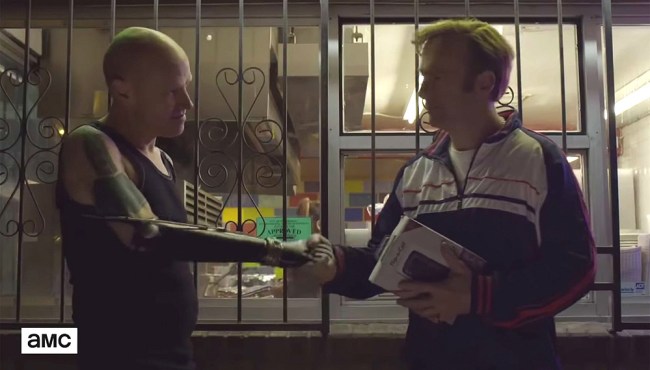 Actor Todd Latourette, who you may have seen playng war veteran “Skell” in season 4, episode 5 of Better Call Saul, now admits that he cut off his own arm to get acting jobs playing, wait for it, a war veteran, on TV shows. Seriously, he did that. And now he feels guilty about it.

According to KOB 4 News, Latourette says he wasn’t taking his bipolar disorder medications 17 years ago when he made the very unusual decision to cut off and cauterize his own right arm.

“I severed my hand with a Skil saw,” Latourette told KOB 4 News. “The state of my mind was a psychotic episode.”

Over the years, he has been telling people that he lost his arm while serving in the military, something that has actually landed him some acting jobs.

“The film industry took a different angle, that I was different, and so they liked that,” he explained. “They trusted me that I was exactly who I said I was. I was a war veteran. I was hired because I lied.”

The actor, who has also appeared in films like The Men Who Stare at Goats and the TV shows Longmire and Manhattan, says he now wants to make amends for lying about his situation all these years.

“I was dishonorable. I’m killing my career by doing this, if anyone thinks this was for personal edification, that’s not the case,” said Latourette. “I’m ousting myself from the New Mexico Film Industry. And gladly so, just to say what I’ve said.”

Now Latourette says he’s coming clean because he wants his story to be serve as a warning that might help others with a similar mental condition.

“The power is in your hands to take your medication in the morning, or at night. So that, this, this discourse of my life doesn’t need to necessarily be yours,” said Latourette. “Because, it happens quick… it happens quick.”