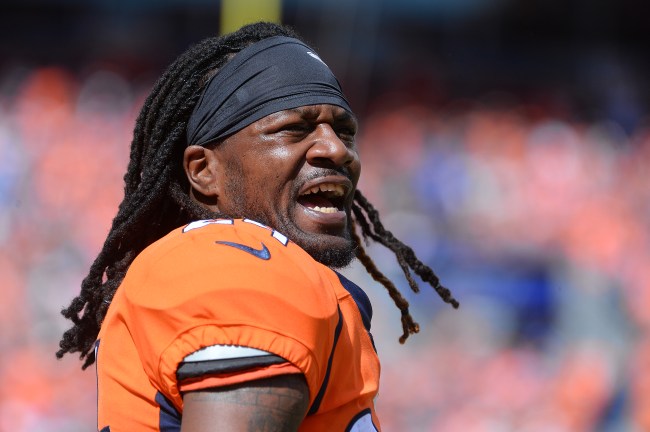 Stop me if you heard this before but Pacman Jones is in trouble with the law.

The former Cincinnati Bengals cornerback was arrested while at the Rising Sun Casino in Indiana after officials with the Indiana State Gaming Commission were called to investigate reports of a person cheating at a table. Jones was suspected of “capping bets,” which is a form of cheating where the outcome of the game is known, and the player then adds more chips to his winning bet.

Adam 'Pacman' Jones has been arrested and jailed in Indiana https://t.co/sKfE0M7G0A pic.twitter.com/P5hPXbjZ3j

TMZ has obtained the details of the arrest and it sounds like Jones didn’t go down without a fight:

Jones didn’t take kindly to the allegations — telling multiple officials, “F*ck you” … while moving his hands in a threatening manner and gesturing with his middle finger, according to the court docs.

During the altercation, IGCE agent Christopher Norton says Jones turned to another IGCE agent and told him, “I will kill you … I will whoop your ass.”

Norton says Jones continued to act in a threatening manner, so he subdued the NFL player and placed him in handcuffs. It was then Norton says he smelled booze emitting from Pacman.

While Jones was being taken to the gaming office, the NFL star allegedly continued to berate law enforcement officers … saying, “F*ck you,” “You ain’t sh*t” and “You ain’t nothing but a bitch.”

While the agents were handing Jones over to the Ohio County Sheriff’s Department, the 35-year-old broke out of custody and made a run for it before he was eventually subdued by authorities.

After he was recaptured, Jones continued to cuss out the cops — saying, “F*ck you,” “Suck my d*ck” and “You’re a bunch of crackers.”

Jones was reportedly hit with eight criminal charges, including felony intimidation, felony battery against an officer. He was also charged with a slew of misdemeanors–cheating at gambling, resisting law enforcement and public intoxication.