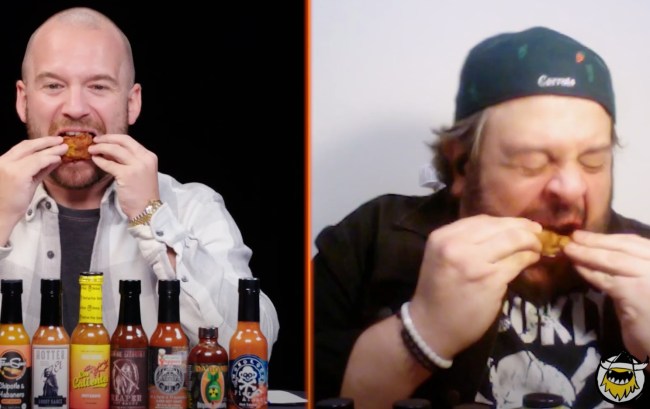 Former Man vs. Food and fellow Tottenham Hotspur fan Adam Richman returned to Hot Ones with host Sean Evans this week. Adam previously appeared on the show to tackle the Hot Ones Challenge back in 2017. That episode always stands out to me because in it Adam discussed the hottest food challenge he ever took and it was a ‘Wall of Pain – Fire In Your Hole’ wings challenge at a restaurant in my hometown, Munchies 4:20 Cafe in Sarasota, Florida.

In that episode, Richman talked about how he could feel his airways closing after eating just two wings which sounds like actual torture to me even though I love spicy food. So I can’t help but wonder what’s brought Adam Richman back to Hot Ones for another round of tasting Da Bomb Hot Sauce, one of the most miserably hot and torturous culinary creations in modern history.

On his second appearance on Hot Ones, Brooklyn-native Adam Richman shares his iconic Brooklyn eating establishments that ‘need to be protected at all cost’. That happens fairly early on in the video, long before he has to eat another wing smothered in Da Bomb Hot Sauce which not only tastes awful it’s just unbearably spicy. It’s bottled up misery masquerading as hot sauce.

If you’re curious what his Top 5 Pizzerias on Earth are just follow that link as well to a recent article here.

I’m sure some of you already know this but you can purchase all of these hot sauces they eat on Hot Ones on their website, The Heatonist, along with other deliciously brutal hot sauces. They sell individual sauces along with 3-packs to fit the season and other bundles. I’m a huge fan of the Los Calientes in their Original Trio but everyone has their own flavors.