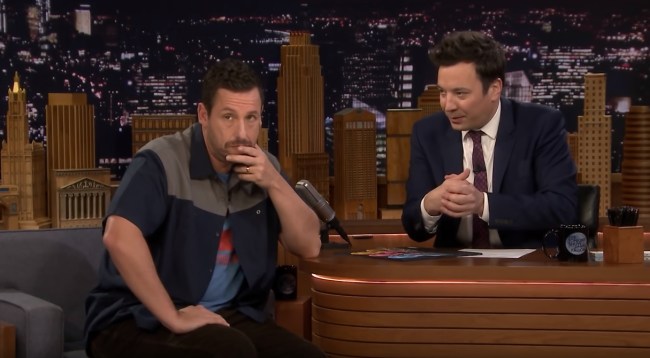 Monday was the fifth anniversary of Jimmy Fallon hosting The Tonight Show, where has the time gone? To celebrate the occasion, Fallon had fellow SNL legend Adam Sandler on the late night talk show to tell stories about Chris Farley, taking dumps at Jennifer Aniston’s house, and performing some music.

Adam Sandler and Jimmy Fallon are very close and share a similar style of comedy that infuses music. Sandler serenaded Fallon by singing him a Valentine’s Day love song that encouraged the late night host to dump Justin Timberlake.

Sandler sang a song appropriately titled My Jimmy Fallontine, a parody of My Funny Valentine, which was originally a show tune from the 1937 Richard Rodgers and Lorenz Hart musical Babes in Arms and was popularized by Frank Sinatra. Sandler’s version had sweet messages to Fallon, but also some playful taunting. “I think it’s pretty cool / you’ve had the same haircut since middle school,” Sandler sang. “And you imitate me with your zaba-daba-do.”

Sandler walked into a room one time and found Chris Farley crying. Farley was listening to his Walkman and Sandler asked why he was crying. Farley answered that he was crying because he was listening to KC and the Sunshine Band. “Usually, I dance to KC and the Sunshine Band,” Sandler said. Farley said that he was crying because the song reminded him of his dad who had passed away earlier. The two bonded over that moment and Farley would still get defensive that Sandler saw him tearing up.

Sandler told another Farley story about Chris doing anything for laughs. While Farley was shooting Tommy Boy, he was also in Saturday Night Live and had to fly from Los Angeles to New York City. In one sketch featuring Adam Sandler’s “Pepper Boy,” Farley was in the skit, but only had one innocuous line. Farley was upset he flew across the country to only have one line in a sketch so he wanted to make his one line count. He put on a completely ridiculously over-the-top beard and delivered an absolutely overdramatic line.

Sandler also tells the story of how his dad promised to buy him a Stratocaster guitar if he learned to play the Spanish classical song “Malagueña” by Cuban composer Ernesto Lecuona note-for-note. After years, Sandler eventually learned how to play the song perfectly so his father bought him the guitar.