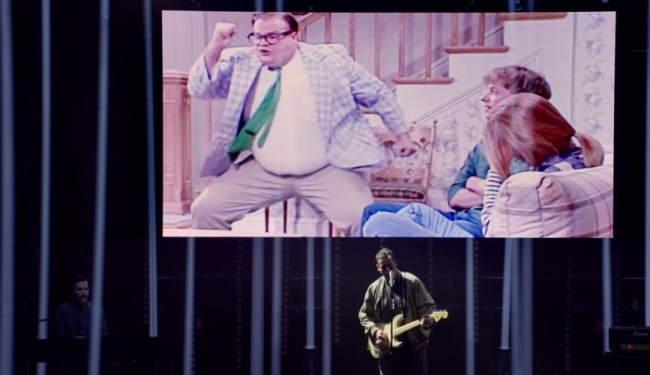 When you tune on an Adam Sandler comedy musical special, you don’t expect to get emotional and all pissy-eyed, But with the Sandman’s tribute song to the great Chris Farley you just might cry over the beautiful way Sandler honored his dear friend. Sandler’s newest 100% Fresh special on Netflix features a touching song that honors Chris Farley, the comedian, the friend, and the loving son.

We’ve already discussed how 100% Fresh has certified bangers such as UFC Ears, Uber Driver, and Phone, Wallet Keys. Now we enjoy this more tender, more loving tribute to the uproarious comedian who left us way too soon.

Sandler’s ode to his hilariously lovable friend praises all of Farley’s SNL sketches and movie characters such as Gap Girls, Matt “Van Down by the River” Foley, the “Chippendales,” the Super Fans, and the Lunch Lady.

But the song also tells some little-known stories about Farley like the first time he met him and he was wearing an overly tight belt, sticking a bottle of Jack Daniels up his own butt, Farley crying about missing his dad, the last time Sandler saw Chris at Tim Meadow’s wedding, and going to his funeral after Chris died of a drug overdose in 1997. Sandler makes it known that Chris Farley was the undisputed funniest person he has ever known.

RELATED: Watch Chris Farley Put On The Performance Of A Lifetime As ‘Tommy Boy’ Is Transformed Into Inspirational Drama

Here are the lyrics to the Chris Farley song:

I saw him in the office crying with his headphones on
Listening to a KC and the Sunshine Band song
I said, “Buddy, how the hell is that making you so sad?”
Then he laughed and said, “Just thinkin’ about my dad”

The last big hang we had was at Timmy Meadows’s wedding party
We laughed our balls off all night long, all because of Farley
But a few months later the party came to an end
We flew out to Madison to bury our friend
Nothing was harder than saying goodbye
Except watching Chris’s father have his turn to cry

Hey, buddy, life’s moved on but you still bring us so much joy
Make my kids laugh with your YouTube clips or Tommy Boy
And when they ask me who’s the funniest guy I ever knew
I’d tell ’em hands down, without a doubt, it’s you
Yeah, I miss hanging out watching you trying to get laid
But most of all I miss watching you fuck with Spade
You’re a legend like you wanted, but I still wish you were still here with me
And we were getting on a plane to shoot Grown Ups 3
It ain’t the same without you, boy

RELATED: 16 Things You Didn’t Know About ‘The Waterboy’ For The 20th Anniversary Of The Adam Sandler Classic