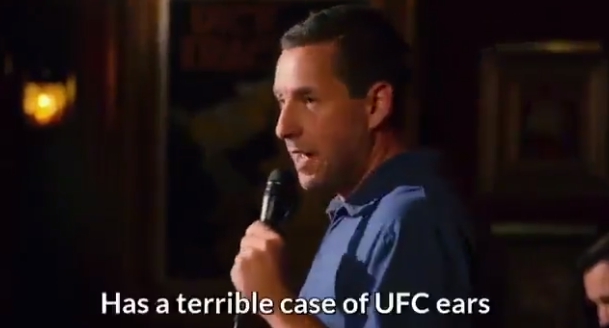 Adam Sandler is officially back! The Sandman’s latest Netflix special 100% Fresh has been out for just over a week and it is already so, so impressive. We’ve already heard the banger Phone Wallet Keys and now we get two more fantastically hilarious joints.

Sandler must have made a deal with the devil or discovered the fountain of youth because once again he is making raucously funny songs that anyone can laugh at because they’re so mindless and catchy. Two more hot tracks have been revealed from his Netflix special — UFC Ears and Uber Driver. Both are stupid funny and anyone aged 10 to 110 can enjoy.

Dana White, the President of the Ultimate Fighting Championship who has built an empire on people dishing out cauliflower ears, posted Sandler’s newest hit track on Twiter. The song solely talks about the plight of MMA fighters who suffer the over-inflamed condition of cauliflower ear that makes their hearing holes swollen AF.

THIS IS MY FAVORITE THING RIGHT NOW https://t.co/Z8BuzJuDji

Then there is the Uber Driver song that talks about a smelly ride-sharing automobile, but the driver might not be the culprit for the putrid odor of feces.

As fantastic as UFC Ears and Uber Driver is, it does not come remotely close to the instant classic that is Phone Wallet Keys.