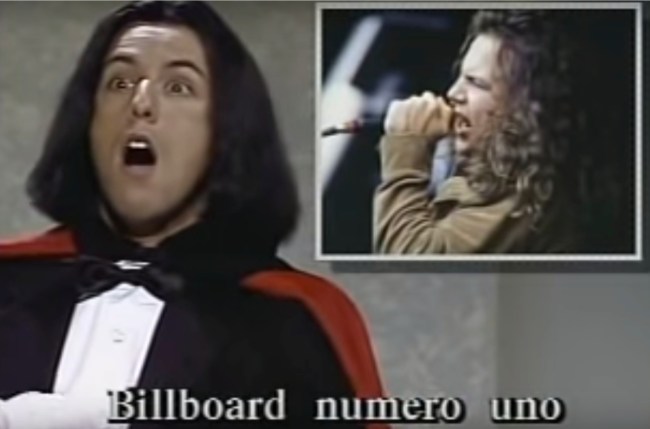 Adam Sandler is returning to Saturday Night Live. Nearly 25 years after being fired by Lorne Michaels while he was a castmate on the late-night sketch comedy show — something that Sandler admitted in 2014 to Vanity Fair he was still confused about — the man who brought us memorable SNL characters like Opera Man and Hank Gelfand, among others, will be hosting the show for the very first time, joining musical guest Shawn Mendes on the May 4th show.

In a statement following the announcement of Adam Sandler hosting, Lorne Michaels, SNL‘s longtime executive producer, said in a statement: “We are happy to welcome Adam back to ‘SNL’ in what is sure to be a special night.”

The news brought some serious reactions to Twitter, with a lot of people hoping that The ‘ler brings back some of his classic characters, which helped shape some of his all-time best comedies like Billy Madison, Happy Gilmore and Bobby Boucher. Here’s some of what Twitter was saying after learning about the news of Sandler hosting Saturday Night Live.

If he does the Farley song, we’re all gonna lose it.

Only took 25 years for Adam to come back home. It’s about time.

Wow. 24 years after being fired from #SNL, Adam Sandler finally returns to host.

Granted, he has made multiple guest appearances over the years.

Hoping we get some Opera Man. Also, I wouldn’t be surprised if pals David Spade, Rob Schneider, Kevin Nealon, etc. stopped by https://t.co/ifSTXhAUX7

Adam Sandler hosting SNL in May. Think I’ll watch that one. pic.twitter.com/9xGMr1yS0L

Im so here for it😜 pic.twitter.com/Or2w7a2cdN

Admittedly, I haven’t watched an episode of Saturday Night Live in about, oh, 10 years or so. But, dammit, if you think I’m going to miss Adam Sandler’s return to the show for the first time in over two decades, you’re sorely mistaken. The dude has singlehandedly shaped my sophomoric humor since I was 10 years old, so I’m obviously watching May 4 when he makes his triumphant return.

Here’s to hoping he busts out some of his old stuff and brings some of his buddies with him — like other old SNL alum like Chris Rock and David Spade — because when those dudes were young and being dumb AF together the first time they all starred on Saturday Night Live, sh*t was hilarious. It’s about damn time they brought Adam Sandler back; and it sounds like the Internet agrees.