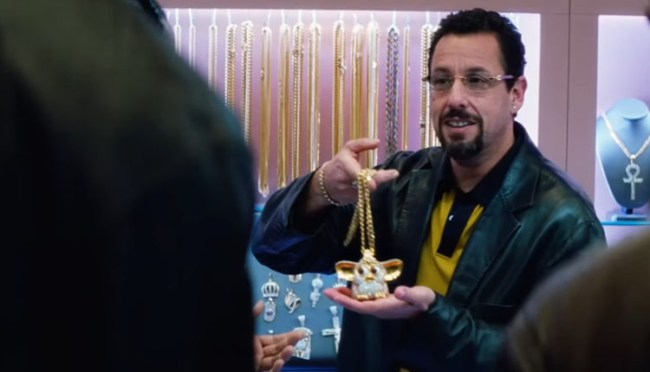 Every so often, Adam Sandler takes a break from his super silly roles and dabbles with drama. For his new role in the movie Uncut Gems, Sandler channels his inner Al Pacino and even looks like a young Pacino.

Uncut Gems is set in the diamond district of New York City. That’s where Sandler plays Howard Ratner, a jewelry store owner and dealer to the rich and famous. After Sandler loses a ton of money in high-stakes bets and is forced to a way to pay off his debts.

The crime drama from A24 is directed by acclaimed filmmakers Josh and Benny Safdie. The Safdie Brothers previously directed 2017’s Good Time, 2014’s Heaven Knows What, and 2013’s Lenny Cooke.

It should be noted that Sandler was nominated for a Golden Globe for his performance in the drama Punch-Drunk-Love, so the Sandman can play a serious role without singing in his high voice or speaking in gibberish.

the movie appeared at the Telluride Film Festival earlier this year. Uncut Gems opens to a limited theatrical release on December 13 and will be available everywhere on Christmas Day.