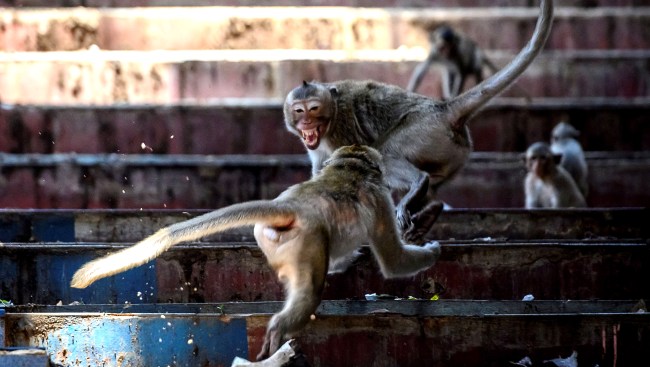 Residents of the province of Lopburi in Thailand, located northeast of Bangkok, are being terrorized by thousands of “sex-crazed” monkeys who have taken over portions of their city.

Rival monkey gangs, angry at the lack of food available with tourism almost non-existent in the wake of the global pandemic, have forced local residents to create human no-go zones and to barricade themselves inside their homes.

Approximately 6,000 macaques have taken over buildings such as an abandoned cinema and a closed shop and in some cases, residents’ actual homes, while getting into rival gang fights on the streets. 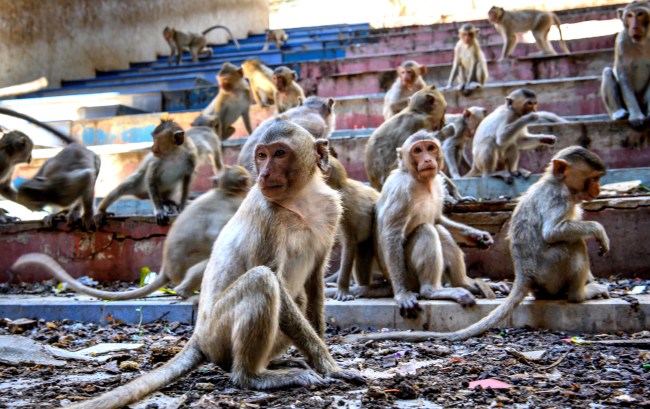 “They’re so used to having tourists feed them and the city provides no space for them to fend for themselves,” said government vet Supakarn Kaewchot, reports The Daily Star. “With the tourists gone, they’ve been more aggressive, fighting humans for food to survive. They’re invading buildings and forcing locals to flee their homes.”

Related: Alcoholic Monkey Went On Rampage In Search Of Booze That Left One Person Dead And 250 Injured

Local resident Kuljira Taechawattanawanna told The Guardian, while pointing to protective netting overhead, “We live in a cage but the monkeys live outside. Their excrement is everywhere, the smell is unbearable especially when it rains.”

One gang of monkeys which took over an abandoned theater are using the projector room to lay all of their fallen gang members to rest like some sort of mini monkey morgue. And if any humans try to enter the building they will be immediately attacked.

Nearby, a shop owner reported regularly stealing spray-paint cans from his store. (To tag their gang’s turf, one has to assume.)

An effort to placate the hangry monkeys backfired when locals tried to give them junk food and snacks. All that accomplished was giving the monkeys even more energy which they use to have sex and wreak more havoc on the town.

“The more they eat, the more energy they have … so they breed more,” said a manager of one of the area’s shrines.

Another resident described a scene where one monkey that found a banana caused an all out monkey street riot.

“They looked more like wild dogs than monkeys. They went crazy for the single piece of food. I’ve never seen them this aggressive,” said a witness to the fight.

Related: Monkeys Stealing Medicine In The Midst Of A Global Outbreak Actually Happens Quite A Lot, According To Movies

The current plan is to try to lure the monkeys into cages with fruit, give the males vasectomies, shave them, and tattoo the monkeys with a reference number that can be tracked.

Or, you know, a typical Saturday night for a gang of monkeys.