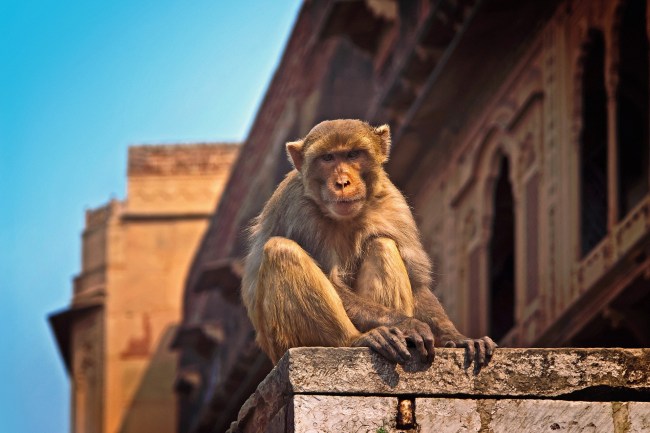 A monkey in India went on a murderous rampage that left one man dead and 250 people injured. The monkey was previously a pet whose occultist owner fed him hard alcohol. When the monkey’s owner passed away, Kalua the Monkey hit the streets in search of more booze and what unfolded was surreal.

According to a report in the Daily Mail, the ‘alcoholic monkey’ used its razor-sharp fangs to attack the vulnerable (women and children), many of whom need corrective plastic surgery now. Gulf News reports that this rampaging monkey attacked a total of 250 people and one man died from the bites.

The monkey will now be kept in a zoo for the rest of his life, in a cage by himself, because his violent and rampaging behavior hasn’t changed at all in the months since the monkey’s been captured and taken off the streets. It’s also believed the deceased owner was feeding the monkey meat which could’ve fueled his raging behavior.

Kalua was a pet monkey of a local occultist who would regularly give him liquor to drink.
Over a period of time, the monkey became alcoholic and when the occultist died, Kalua stopped getting liquor and became aggressive.
As he went on a biting spree and created terror in Mirzapur, forest and zoo teams were called in to catch the monkey.
After several efforts, Kalua was caught and brought to the Kanpur zoo.
“We kept him in isolation for some months and then shifted him to a separate cage. There has been no change in his behaviour and he remains as aggressive as he was. It has been three years since he was brought here, but now it has been decided that he will remain in captivity all his life,” said the zoo doctor Mohd Nasir.
The monkey is six-years-old and the zoo doctor said that if he was set free, he would harm people wherever he went. Kalua has not even befriended his cage keeper till now. (via GulfNews)

If you had ‘murderous rampaging alcoholic monkey’ on your 2020 BINGO card then you can go ahead and mark that box.

The Daily Mail adds that they initially tried to keep Kalua the Moneky in a cage with other monkeys but he was violent and hostile towards the others and he was also violent towards his personal zookeeper, all of this led to the decision to put him in his own cage.

And I know this sounds wildly insensitive to monkeys, and there are probably aspects of this story I’m failing to grasp, but why haven’t they euthanized the monkey? It murdered a person. Sure, the monkey was addicted to alcohol because some occultist fed it booze and that’s no fault of the monkeys but it murdered a person and attacked a total of 250 people. Now this monkey is living out its days in a zoo which has to pay for his food, maintenance, cage, etc.

Would it really have been that insane of the trappers who caught him on the streets after he attacked 250 people had shot the monkey instead of bringing it in for rehabilitation? I’m all about the conservation of species. I almost always practice catch-and-release when I’m fishing. I’m as much of an animal lover as most people. But this monkey murdered a person and attacked children. Attacking just one kid is too many. Who let things progress this far?

The article over on the Daily Mail has some wild stories about other recent monkey attacks. You can check that out right here.