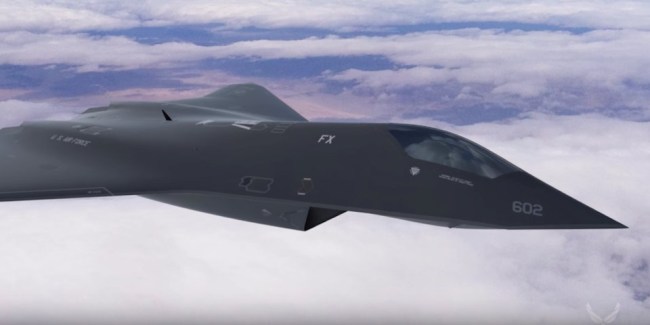 The United States Air Force released a video showcasing some of the insane technology that could change the future of air, cyber, and space warfare in the near future. The video was created by the Air Force Research Laboratory (AFRL), a research and development arm of the USAF, and it features a variety of new aircraft and tech that would provide the U.S. air superiority in the year 2030.

Another possible future scenario is where the cargo bay of a C-130 military transport plane opens up and a robot pushes a silo-like pod off the aircraft and seconds later hundreds of small drones detach and are deployed on a mission. The Air Force flaunted their Counter-electronics High Power Microwave Advanced Missile Project otherwise known as “CHAMP.” A stealth bomber launches a cruise missile-like weapon that flies over a city and uses a high-powered microwave to fry nearby electronics and cause a blackout. The AFRL has been developing CHAMP weapons for nearly a decade.

In the last clip, the Air Force boasted their sixth-generation fighter called “F-X,” Penetrating Counter Air or Next-Generation Air Dominance. The sleek and stealthy fighter is equipped with a directed energy weapon and the laser weapon slices an enemy fighter in half. The military might of the USAF looks incredible for 2030.