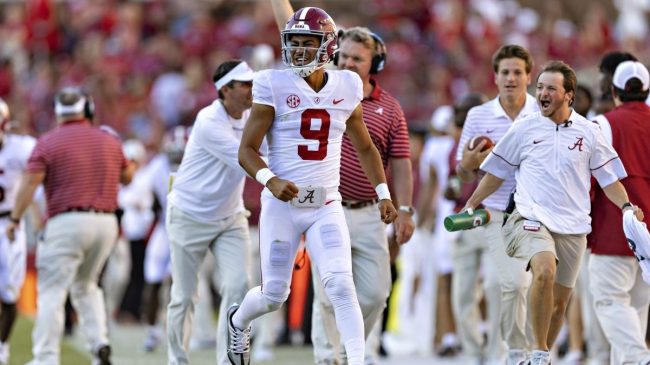 Speculation raged about a potential rotator cuff injury that could keep Young out long-term. But as the week progressed, the news began to get brighter and brighter for Bama fans.

Alabama head coach Nick Saban said earlier in the week that Young practiced with the team all week. But Saturday brought the most encouraging news yet via ESPN’s College GameDay reporter Pete Thamel.

“It’s going to be a day of game-time decisions, and none of them loom larger than Bryce Young,” Thamel said. “What we know about him right now is that he is going to be a game-time decision today. He has practiced only lightly so far this week. Look for Bryce Young this afternoon to go through his first rigorous throwing workout. How that workout goes is going to determine whether or not he plays for the Crimson Tide tonight.

“The best news for Alabama fans will be that if he does not play, he’s expected to be close to 100 percent for that big matchup at Tennessee next weekend.”

Young has once again proved to be one of the best players in college football in 2022. He’s completed 67.2 percent of his passes through 4.5 games. He’s also thrown for 1,202 yards, 14 touchdowns and three interceptions.

Alabama takes on SEC West rival Texas A&M on Saturday in a revenge game. The Aggies upset the Tide, 41-38, in 2021. While Saban and Aggies’ coach Jimbo Fisher engaged in a war of words during the offseason.