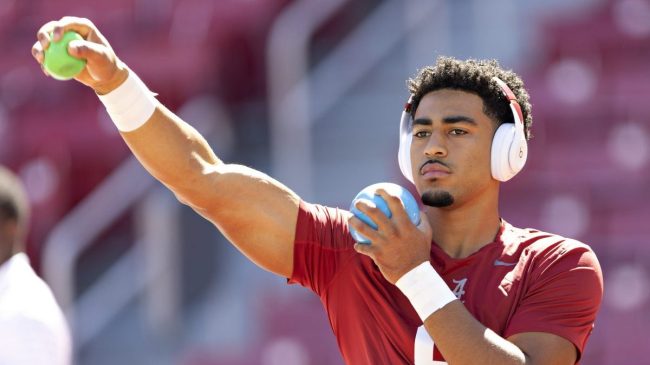 Bryce Young was nothing short of incredible for the Alabama Crimson Tide in 2021. The sophomore quarterback threw for 4,872 yards, 47 touchdowns and just seven interceptions. He also helped lead the Tide to an SEC Championship and yet another appearance in the National Championship Game.

While Bama eventually lost that game to SEC rival Georgia, Young did enough to take home the Heisman Trophy. With Young back and a host of other offensive talent with him, the Crimson Tide opened the season as historically large national title favorites.

Young showed just how valuable he can be when he led Alabama to a comeback, last-second victory over Texas in Austin.

But now it looks like the Tide will have to forge ahead without their leader and most dangerous offensive weapon.

Young led Alabama to a quick 14-0 lead in its SEC West game against Arkansas on Saturday. But he appeared to injure his shoulder trying to brace himself while falling mid-way through the second quarter.

Here's the play where Bryce Young got injured.

He left the game shortly after and did not return. Redshirt freshman Jalen Milroe played the rest of the half for the Crimson Tide and they led 28-0 late in the first half.

Bryce Young throws his helmet in frustration and heads to the injury tent after this play pic.twitter.com/IgrRwua2Va

CBS sideline reporter Jenny Dell said that Young appeared to be in serious pain when he left the game. While commentator Gary Danielson noted that he previously suffered a torn rotator cuff on a similar fall.

The injury was the second of the day for big-time SEC quarterbacks. Kentucky signal caller Will Levis, who like Young is a projected first-round pick in the 2023 NFL Draft, suffered a gruesome finger dislocation while taking a safety against Ole Miss.

Similarly, Texas was once again without star QB Quinn Ewers. Ewers, like Young, suffered a shoulder injury that ironically came against the Crimson Tide. The Horns hope to have him back next week for the Red River Rivalry against Oklahoma.