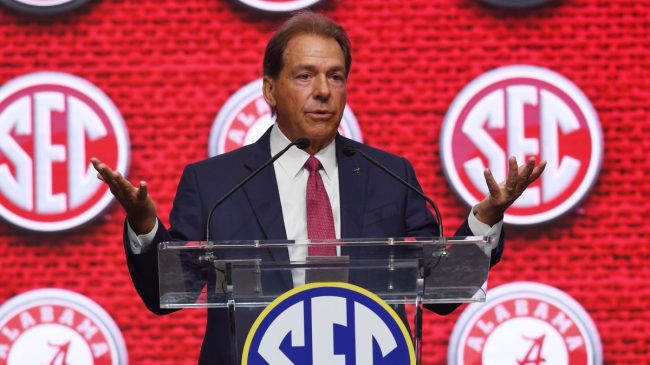 The Alabama Crimson Tide are shaping up to be a very, very good football team in 2022. Nick Saban’s group went 13-2 in 2021 and took home another SEC Championship. Though they eventually fell in the national championship game to conference rival Georgia.

But that’s okay, 2021 was a rebuilding year for the Crimson Tide according to Saban.

Young and Anderson lead a star-studded Crimson Tide that isn’t just the favorite to win a national championship, it’s an overwhelming favorite.

Saban is not stranger to national title caliber teams. The legendary head coach has seven national championships to his name and is considered by some to be the greatest of all-time. But he not allowing his team, or the media, to get ahead of itself.

What Saban may not know, however, is just how great the expectations are for the 2022 team.

ESPN’s David Purdum reports that Alabama is not just the national title favorite, they’re one of the largest favorites in the last two decades.

The Crimson Tide are around +180 to win the College Football Playoff at sportsbooks around the nation. Since 2001, only USC (+160) in 2005 and Alabama (+175) in 2018 had better preseason championship odds, according to SportsOddsHistory.com.

Alabama checks in ahead of Ohio State (+300) and defending champ Georgia (+425) as the only teams with single-digit odds per Caesars Sportsbook.

Bama opens the season on Saturday with Utah State. The Crimson Tide are 41-point favorites in that contest. Purdum reports that Saban’s side could become one of 14 since 1978 to be favored by double digits in every regular season game.