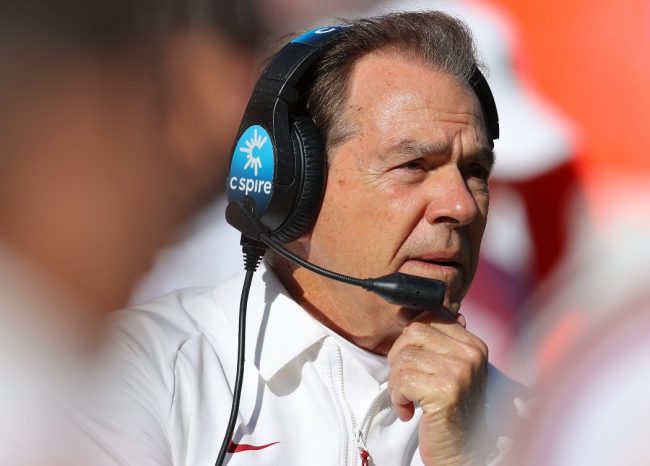 After a spectacular season last year, the Alabama Crimson Tide fell just short of securing another College Football National Championship. The Georgia Bulldogs were able to bounce back and win their first title since 1980. Now, it Nick Saban gets real about what transpired in that championship matchup.

Nick Saban Gets Real About 2021 National Championship Loss To Georgia

Saban has led Alabama to six championships. They’ve easily been the most dominant college football team for over a decade and they’re not going to slow down anytime soon. Even so, the Crimson Tide can’t win them all, as the Bulldogs got the best of them in the 2021 National Championship. According to On3, Nick Saban gets real about the big loss to Georgia.

“I think that we weren’t able to finish. One of the things you have to do to be a great competitor is when things don’t go well in a game, you’ve always got to be able to hit your chest, recenter, refocus your energy so you can play the next play. And being ahead, 18-13, with 10 minutes to go in the game, and then giving up what, 21 points or something in the final 10 minutes of the game, was really, really disappointing.”

Nick Saban is optimistic about the future of Alabama though. He’s not letting the championship loss hinder his team for the 2022 season, per On3. “But I think players remember their disappointments, which can [be] used as a really positive motivator, I think, for the future. And hopefully, that will help us this year and do the things we need to do to have success.”

Watch out for the Crimson Tide this year, as Nick Saban aims to get back to his winning ways.