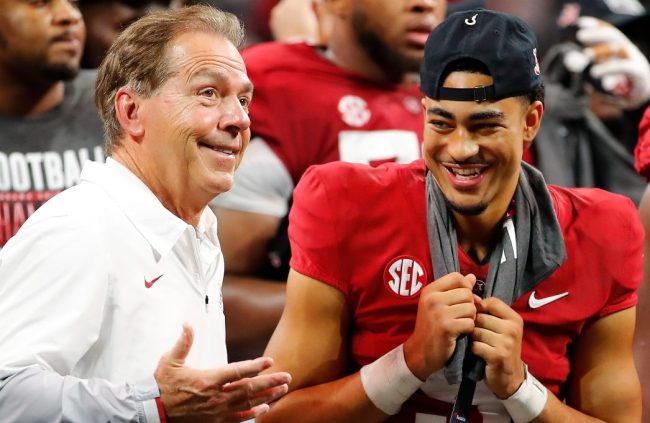 The Alabama Crimson Tide are gearing up for another big year as they have one of the best rosters in the nation. They’ll be led by Bryce Young, who has shown NFL-caliber skill under center. He’s leading the way once again, and Nick Saban is loving his young quarterback. The Crimson Tide head coach makes some eye-opening comments about Young, and it somehow makes the team scarier.

Alabama should be set to have a big season and it sounds like Bryce Young is going to be the driving force. Nick Saban couldn’t help but hype up his quarterback while visiting SportsCenter for an interview. Here’s what the Crimson Tide head coach had to say about Young’s first year as the starting quarterback.

“Well I think people forget that Bryce was a first-year starter last year, so sometimes you don’t feel like when you’re a new guy, a new starter, that you should really be taking the bull by the horns and being the kind of leader that impacts and affects other people, especially when there’s a lot of old players around you.”

Now, entering his second year as the starting quarterback, Nick Saban can’t help but rave about Bryce Young, per On3. “I think this year he’s got a completely different disposition when it comes to that, he’s done a really really good job of affecting the players around him in a really positive way. He’s had a great attitude about continuing to try to improve and get better. He’s not satisfied at all with where he was, and where he is, and where the team is so I think those are all positive factors for us.”

Watch out for Nick Saban, Bryce Young, and the Alabama Crimson Tide as they aim to make another trip to the College Football National Championship.