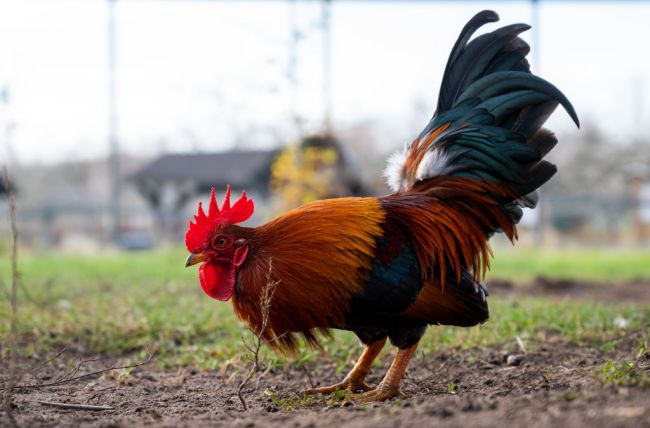 18-year-old Thomas Ramsey was headed home to Gallman, Miss. from a Civil War reenactment in Springhill, Tenn. and decided to stop for lunch. He and his friend pulled over about an hour and 45 minutes into their drive at a Cracker Barrel in Cullman, Ala. on Jan. 31. While the two went in to grab a bite to eat, Ramsey decided to let his pet rooster Peep out to stretch his legs.

As Amy Henderson of the Cullman Times tells it, Peep is a handsome fellow:

In keeping with the standards of this [Buff Orpington] breed of chicken: heavy, with a broad body and low stance and having a “bold, upright and graceful” carriage. He’s been the cock of the walk ever since Ramsey found him on a roadside last summer when he was still a young chick.

Ramsey, who has been participating in war reenactments for four years, uses them to connect with history. He has participated in events from Colonial times up to World War II, but the majority of them are from the Civil War:

He’s been around the country, from Pennsylvania to West Texas, participating in 16-20 reenactments each year. He’ll spend three hours a day for six to seven months researching for an event. When he’s been part of organizing event, the research kicks up to six to seven hours a day over a multiple months. For one event, he said, “I had all my men spend a minimum of 10 months preparing with accents and everything.” The experience, he said, humanizes history. He said he’s not focused on being on any particular “side” of history, but on representing the people and times accurately.

While he was preparing for one of his reenactments, Ramsey read a story of a Confederate soldier who carried his rooster around with him for two years. He has brought Peep with him ever since.

“There’s about 10 cannons just blazing and all the rifle fire and he’s not going crazy. He’s pretty chill,” said Ramsey. Peep is, said the teen, “a real solider.”

Anyway, back to Cracker Barrel.

Ramsey, his friend and Peep rolled up to the restaurant in Cullman and went into get some food. Once their order was placed, Ramsey took the rooster out of the truck, attached him to a leash and went for a walk until their meal was ready. When they went in to eat, they tied the rooster’s leash to the bed of the truck, which they had done several times before. Peep was gone an hour later.

“I went back into the Cracker Barrel and it was very hard for me to say this with a straight face, even though I was panicking: ‘Do you have cameras in the parking lot? I think someone stole my chicken,’” Ramsey said.

After searching the parking lot with no success, Ramsey called the local authorities. Cullman Animal Officer Cooper Harris was on the receiving end of the call and spent the afternoon looking for Peep. He even checked a nearby farmer’s coop to see if he had wandered over there on his own.

Meanwhile, Ramsey had posted on several local Facebook pages and asked for help with locating his rooster. With his resources exhausted, he and his friend headed home with hopes that someone would find Peep.

About three and a half hours later, half an hour away from home, Ramsey received a call from a man who had found Peep back in the Cracker Barrel parking lot where he got loose. From there, it was a long journey home. A local farmer saw that Peep had been found and went up to the restaurant to make sure he got home safely.The man, by the name of John Watson, ended up driving to meet Ramsey in the middle and brought the rooster an hour south to Birmingham.

The long-winded search-and-rescue effort came to an end and Ramsey was reunited with Peep. The two are back at it with their historical reenactments.