Alaska Man Survives Nasty Mauling By Giant Grizzly Bear After Having His Head In Its Mouth, Nearly Bleeding Out 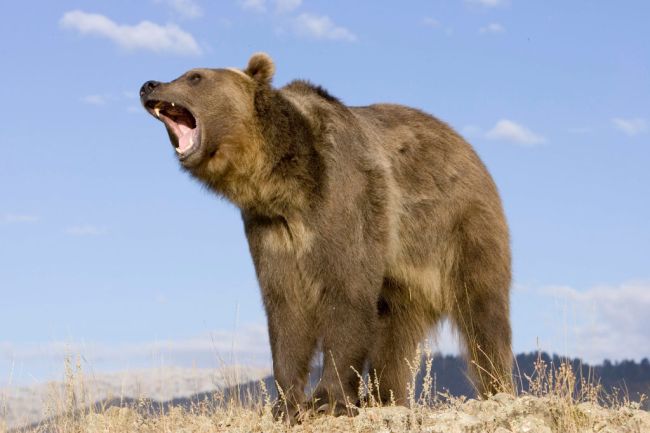 An Alaska man is lucky to be alive after being mauled by a grizzly bear earlier this week. Allen Minish was out walking alone in a remote part of the state to survey some land on Tuesday. He looked down to put some numbers into his GPS, and when he looked up, he was staring a large brown bear in the face.

Both parties locked eyes at the same moment and the bear charged. Minish tried to hide behind some trees, but the bear didn’t stop. He was knocked to the ground and then a terrifying sequence played out. Though the encounter lasted less than 10 seconds, Minish believes, it left serious damage.

“As he lunged up on top of me, I grabbed his lower jaw to pull him away,” he said to CBS Anchorage affiliate KTVA-TV. But he tossed me aside there, grabbed a quarter of my face.”

Grabbing the bear’s lower jaw left a puncture wound in Minish’s hand. However, that was the least of the harrowing injuries.

“He took a small bite and then he took a second bite, and the second bite is the one that broke the bones … and crushed my right cheek, basically,” he said.

The bear then put its mouth over Minish’s head before it dropped him back on the ground and wandered off. The 61-year-old had run into bears before, but he knew by the amount of blood that this instance was different.

The will to live.

Minish called 9-1-1 immediately and wrapped his T-shirt and vest around his head with hopes of stopping the bleeding. He stayed on the line for 59 minutes, according to his phone log, before help arrived. He was able to give the exact GPS coordinates at one point, but even that was hard to see with the amount of blood in his eyes.

Rescuers tried to carry him through the woods to meet an ambulance. That didn’t work, so they had to help Minish walk a quarter mile through swamps, brush and trees. This man was attacked by a bear, bleeding profusely out of his head and waited an hour for help to arrive. AND THEN HE WALKED TO SAFETY! Insane.

Minish was taken to a nearby airport and flown to Anchorage by medical helicopter. He is currently listed in good condition at Providence Alaska Medical Center.

The most recent update.

The mauling was not fatal and Minish is fortunate to be alive. He was, however, left with a crushed jaw, a puncture wound in his scalp and multiple lacerations. The puncture was so deep that the doctor told Minish that he could see the bone.

He underwent a 4.5-hour surgery and had much of his head stitched up and jaw secured. Minish is also wearing an eyepatch on his right eye and told CBS that doctors are “worried about it.”

Despite his current condition, Minish is in surprisingly good spirits. He has had trouble sleeping and continues to have nightmares related to the attack, joking about the encounter is his way of coping and relieving stress.

“In all honesty, it wouldn’t have mattered either way,” he laughed with CBS. You know, if it killed me, it killed me. I had a good life; I’m moving on. It didn’t kill me, so now let’s move on to the other direction of trying to stay alive.”

For Minish to survive is insane. For him to be chipper despite his condition, is a testament to the legend that he is.