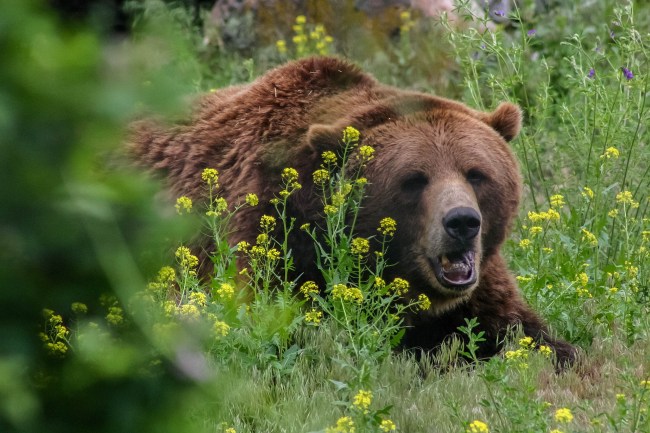 Animatronic robots tend to freak me out. I wasn’t a fan of the ‘It’s A Small World’ ride at Disney as a kid and that Country Bear Jamboree with the animatronic bears freaked me out as well. There’s just something about how these creatures try so hard to look real that makes them borderline terrifying and assuredly creepy. That’s where we stand with this ‘spy’ bear.

This clip is just a tiny portion of Spy in the Wild, a nature film where 50 hyper-realistic ‘spy creatures’ were used all across the planet to get close-up wildlife footage unlike anything we’ve seen before. In this particular clip, they are using a creepy lifelike grizzly bear that’s situated on a salmon stream and this ‘spy’ bear is fishing alongside the actual grizzly bears.

We see a family of bears stroll up and all investigate the spy bear but ultimately go about their business super close to the spy bear. Like most things on BBC One, we don’t have Spy in the Wild on TV here yet but I assume we’ll get it sooner or later.

Check out this wild up close and personal footage of some Alaskan grizzlies:

If you enjoyed this clip, there are several more ‘spy’ animal clips available for you to enjoy on this same YouTube channel. I’ve gone ahead and included one of a robot meeting and getting wrecked by a Komodo Dragon and another of some Silverback Gorillas.

Spy in the Wild is about to come back for a second series on BBC One. You can check out more about that over on the Wiki page if you’re interested.