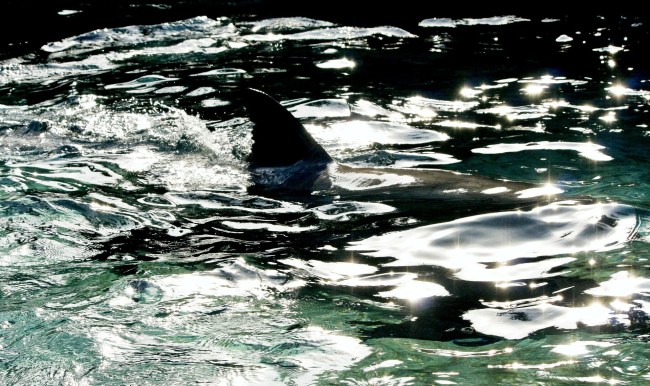 A fisherman reeled in the catch ‘of a lifetime’ whilst fishing off the Isle of Wight when he pulled up an albino shark from what I can only assume was the depths of Hell. This year’s Halloween coincides with a Blue Moon (2nd Full Moon of October), it lands on a Saturday which is the week’s ultimate day of mayhem, and it is also the night we ‘Fall Back’ for daylight saving’s time.

Halloween started as some sort of Celtic tradition where people would light bonfires and dress up to scare away ghosts, spirits, and things that go bump in the night but bonfires don’t work below the ocean’s surface and they certainly wouldn’t keep away albino sharks from tearing it up on the coastline.

Fox35 Orlando had this to say about the species and condition:

The tope shark, or school shark, has a condition called leucism that results in loss of pigmentation. Leucism occurs when some or all pigment cells fail to develop during differentiation, so part or all of the animal’s body surface lacks cells capable of making pigment. (via)

Just look at this shark and tell me that this thing didn’t escape from another world.

Angler Jason Gillespie of England is the man who reeled in this shark and he told SWNS “What’re the chances? I have no idea. It’s the fish of a lifetime, one in a million.” later adding “I’ve been fishing for 30 years and I’ve never seen one like that.”

I’ve been fishing my entire life and have caught countless sharks over the years and never once have I even seen an albino shark let alone reeled one in. In fact, I’d never even heard about the existence of albino sharks until now.

Being a predator AND standing out like a sore thumb because of albinism has to be a rough way to go through life. Not only can the prey see the albino shark coming easier but the albino shark also stands out like a sore thumb to larger predators. Interestingly, this is a protected species there and one that isn’t usually photographed like this according to FOX 35 Orlando:

“I [had] heard of one person from Wales who caught one years ago but it was much smaller, about 6 lb,” Gillespie explained. “I think generally if they lose their color, they struggle to survive because they don’t have the same camouflage and they can’t hunt as effectively and they get picked up by predators.”

“With tope, they are a protected species, so we unhook them in the water, but the minute we saw this one I shouted to my mate to grab the net and knew I needed to get some photos of it so we pulled her on board and took some pictures,” Gillespie added.

This reminds me a bit of this Albino Tarpon (piebald tarpon) which was caught a few years back. You can see them sticking out like a sore thumb in the water and larger predators can spot them from far away. It really is a miracle for an albino species to make it to adulthood in the wild.