Alex Trebek Talks About Violent Pain From Cancer That Had Him ‘On The Floor Writhing’ While Taping ‘Jeopardy!’ 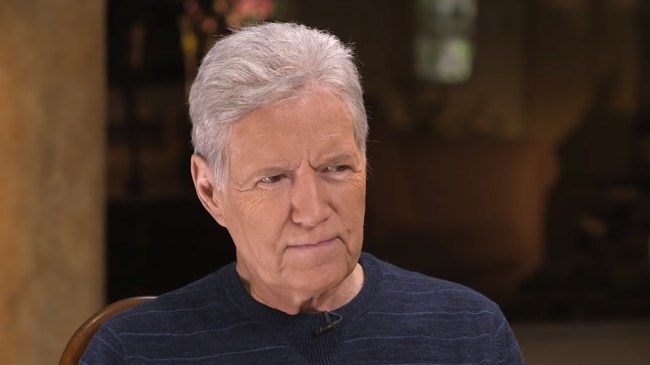 Jeopardy! host Alex Trebek is opening up about his excruciating battle against stage 4 pancreatic cancer.

“The challenge for Jeopardy! viewers right now is to figure out, ‘Is that Alex’s real hair, or is that a full hairpiece?'” Trebek asked. In Jeopardy fashion, Alex answered in the form of a question, “What is a wig?” “We have the summer months off,” Alex said. “So hopefully my own hair will grow back. Because I like my own hair.”

Trebek also revealed the violent pain from his cancer. Trebek revealed that while taping Jeopardy!, Alex curled up in the fetal position in his dressing room in the middle of shows. “This got really bad,” Trebek told Pauley. “I was on the floor writhing in pain.”

The chemo treatment caused severe and debilitating cramps in his abdomen. Trebek said at any moment that his pain would spike “from a three to an 11.” He would rush to his dressing room to deal with the pain in his abdomen. The cramps came “three or four times a day while we were taping – and the tight turnaround time between episodes.

The cramps often happened “15 minutes before the next show.” Trebek said, “So I got myself together and spasms of that kind usually last about 10 to 15 minutes. So all right, here we go again. ‘Anybody got any pain pills?’ And I don’t like taking pain pills. But – so I – I got through it.”

Trebek rather deal with the agonizing pain than have to cancel a taping of the show, especially when everyone is watching Jeopardy! to witness current champ James Holzhauer’s incredible winning streak. “The producers were very kind. They said, ‘Look, if you – If you don’t want to do the show – we’ll just cancel taping.’ I said, ‘No. We’re here. We’re doing the shows.’”

The 78-year-old Daytime Emmy winner who has been hosting Jeopardy! since 1984 said that doctors found a lump “the size of a small fist” in his abdomen. “I didn’t know what was happening,” Trebek said of the suffering that forced him to “cry in pain.”