Alex Trebek Said He Won’t Discuss Who His ‘Jeopardy!’ Successor Should Be But Also Said He’d Love For Betty White To Takeover 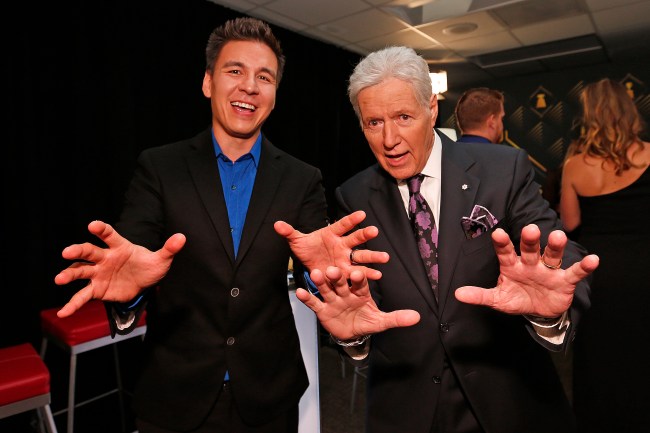 It is hard to imagine Jeopardy! on TV without Alex Trebek as the host but that’s a reality that isn’t too far off in the future. He’s a living icon. He’s part of the Jeopardy! DNA and has been an everyday fixture on the show since its revival in 1987 but he is 79-years-old and at some point, the showrunners will be tasked with finding his replacement.

Ken Jennings was named the Jeopardy! ‘GOAT’ and I personally believe that he’d be the logical and best replacement for Alex Trebek, should Ken eventually want the job. But I’ve always assumed that it would be up to Alex Trebek to name his successor and it turns out I’ve been incredibly wrong.

Speaking with TVLine in an interview, Alex Trebek was asked about his successor and he gave a straight forward answer on how he wants no part in the process. This was prompted by a recent moment on the ABC special Jeopardy!? Alex Trebek and America’s Most Popular Quiz Show where Alex gave a 30-second farewell message to fans that ended with “Don’t ask me who’s going to replace me, because I have no say in that whatsoever.” Clearly, he’s not avoiding the subject but is also direct about his role. Here’s what he had to say to TVLine:

“It’s not a decision that would be up to me. And I would not make myself available to presenting an opinion,” Trebek explained to TVLine at the TCA winter press tour, following a panel Q&A for the well-watched Greatest of All Time tournament. “I would leave it up to the people in charge.”

Speaking of whom, TVLine in turn asked Jeopardy! executive producer Harry Friedman about Trebek’s role (or lack thereof) in helping scout out the game show’s next host. “[Alex] really has no interest in being involved in that process,” said Friedman. “We would welcome his opinion, obviously, but he feels like it’s really not up to him. And he has said that for a long time.”

So, outside of tendering a formal recommendation, who is Trebek’s dream pick? “When people ask me who I’d like to see replace me, I say, ‘Well, it’s probably going to be a woman, and she’ll have to be bright, she’ll have to have a good sense of humor…’ Uhhhh, let’s see…. Betty White! Betty White is my choice.” (via TVLine)

As I said before, it’s pretty impossible to imagine Jeopardy! without Alex Trebek but that it’s something that could become a reality within the next few years. The showrunners will be tasked with deciding whether they should choose a celebrity, a household name, or someone the fans would welcome with open arms like Ken Jennings (if he wants the job).

I have no clue what Jeopardy!‘s filming schedule is like and how rigorous of a job it is but I’m sure the potential job candidates will have a firm grasp of the job requirements and I can’t help but shake the idea that there’s really nobody out there for the job other than Ken Jennings or Brad Rutter. James Holzhauer would be another name thrown into the mix but Ken has an endearing on-camera presence that I think lends itself perfectly to the role.

Who am I missing? Who do you guys think would make an ideal Jeopardy! host in the years ahead?