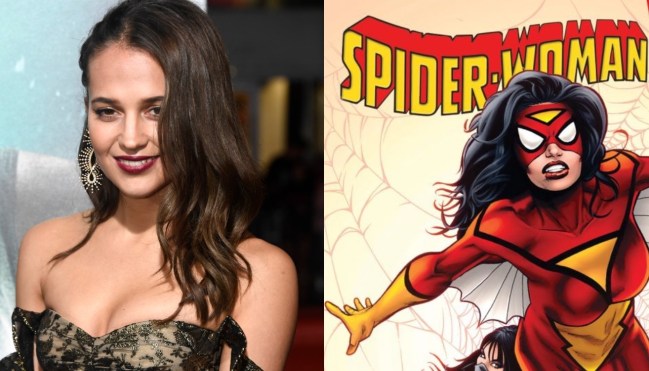 With their own mini-Marvel Universe now fully operational, Sony seems intent on expanding its cast of Spider-Man adjacent characters.

With both Morbius and Venom 2 due out this year, and another mysterious Marvel film set for Fall of 2021 — Sony’s Marvel Universe is now well and truly up and running, and according to recent rumors, Spider-Woman may be the next character to join the party.

According to a report from The Illuminerdi, Sony is rumored to be eyeing Academy Award-winner Alicia Vikander for the lead role in an eventual Spider-Woman movie. Vikander, 31-years-old, has already won an Oscar for Best Supporting Actress for her work on The Danish Girl.

Sony appears to be interested in having Michelle MacLaren direct the film. Although she hasn’t directed a feature film, she has a deep resume of work directing episodes of Game of Thrones, Better Call Saul, and X-Files. She also won two Primetime Emmy Awards for her work on Breaking Bad.

The studio also has an ideal actress in mind to take on the role of Jessica Drew: Alicia Vikander (Tomb Raider), who has plenty of experience leading a franchise. If the film comes together as Sony wants it to, then we could be looking at another connection from the Spider-Verse corner of the universe to the main MCU. [via The Illuminerdi]

Additionally, the report states that the film will be based on Jessica Drew, who is best known for being the original character to bear the Spider-Woman name.

In Marvel Comics, Drew becomes deathly ill due to uranium exposure from her father’s scientific experiments. Drew’s father was then forced to use an experimental medicine, which based on the biology of an irradiated spider, to save her.

Given Sony’s direction with their mini-Marvel Universe thus far, the inclusion of Spider-Woman certainly seems like a natural fit, especially if they can land a talent like Vikander.

Morbius, the next film in Sony’s Marvel Universe, is set to hit theaters on Friday, July 31, while Venom 2 — which sees Woody Harrelson join the cast as Cletus Kasady/Carnage — hits theaters on October 2.