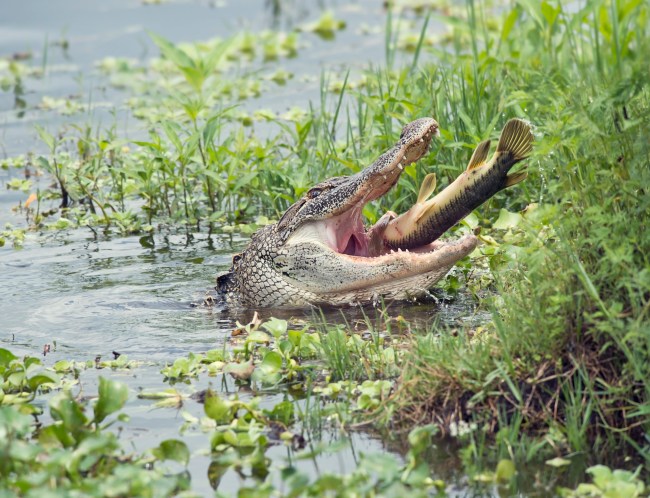 Running into alligators is a daily occurrence here in Florida. I randomly saw gators five days in a row earlier this month and started to consider whether or not I should make ‘spot an alligator every day’ my new year’s resolution for 2020.

In high school, I once found an alligator in the bathroom that had to be removed. They’re everwhere. In our lakes, rivers, and even in the saltwater sometimes. Alligators are as much a part of the fabric of Florida as Disney World and orange juice.

Georgia resident Dave Jacobs and his family were on vacation in Florida and when they showed up at their Airbnb and were greeted by some good ol’ fashioned Florida hospitality. They found a live alligator in the pool riding on top of an alligator pool float.

If that sounds meta as hell then you’re not the only one making that observation, Dave Jacob’s 14-year-old daughter said pretty much the same. That is according to the report from the Miami New Times:

“My daughter, who’s 14, was like, ‘Dad, this is soooo meta,'” Jacobs tells New Times.
Jacobs says his family first spotted the gator in the lake outside of their vacation rental Saturday. The alligator seemed to be taunting their dog, Rascal, who spent the day barking and running around the screened-in pool deck.
“We thought that was pretty cute,” Jacobs says. “Then, the next day, it just showed up in the pool.”
Jacobs’ wife called the Airbnb’s owner, who contacted someone from wildlife management. Eventually, the gator wrangler was able to fish the reptile out of the pool. He told Jacobs he’s been busy lately because it’s mating season for alligators.
“I guess it’s not that unusual, but it was unusual to me,” Jacobs says. (via Miami New Times)

Just look at this little gator, as happy as can be:

As a born and raised Floridian, I’ve been around alligators my entire life. I grew up on a golf course named ‘Gator Creek’. But until last week, I never knew where alligators got their names from:

‘El lagarto’ is a Spanish term meaning “the lizard,” which was what Spanish explorers and settlers called alligators when they first saw them in Florida. It was Anglicized into “allagarter” and then “alligator.”

Now you can go forth into the world and spread this knowledge.